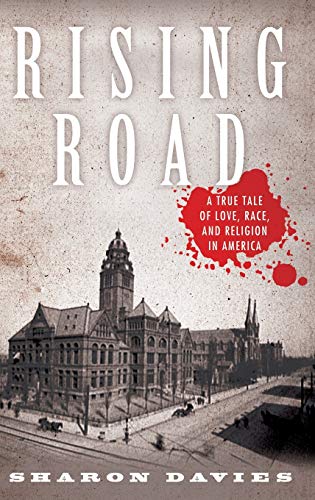 Rising Road: A True Tale of Love, Race, and Religion in America by Sharon Davies

In Birmingham, Alabama in 1921, an unstable and fiercely anti-Catholic Methodist minister named Edwin Stephenson shot and killed James Coyle, an Irish Catholic priest, in broad daylight on the rectory steps of his church. As it so happened, the fiercely intelligent priest had married the minister's 18-year headstrong daughter Ruth -who secretly turned to Catholicism at the age of 12-to Pedro Gussman, a 42-year old Puerto Rican of indeterminate racial ancestry. The resulting trial has virtually disappeared from historical memory, but it was a sensation at the time. It featured all of the elements of intolerance that dominated the era: Southern racism, anti-Catholicism, and xenophobia. Adding to the intrigue, the minister, a member of the recently revived Ku Kluxl Klan, hired future Supreme Court Justice Hugo Black as his defense attorney. Black would become a legendary champion of civil rights later in life, but in 1921, he was a few years away from joining the Klan himself. Entering a plea of temporary insanity, Black based based his claim on his belief that the Puerto Rican husband was black, which not only was an affront to the Southern racial order, but clearly in violation of the state's anti-miscegenation laws. Sharon Davies tells this incredible story through a narrative of the romantic relationship between Ruth Stephenson and Pedro Gussman, but she positions it in its historical context: the hard-but-fraying racial and religious orders of 1920s America. Through the story of a heinous crime and its aftermath, Davies provides an epic account of the consequences of prejudice at the height of the Jim Crow era.

Davies' graceful style, along with a vivid, engaging narrative and insightful analyses, is certain to make Rising Road appreciated beyond the scholarly community. * Crystal N. Feimster, Times Higher Education *
Unlike many historians and journalists who have written about Birmingham, Davies does a good job of placing the city's violence and intolerance into a broader national context. * James L. Baggett, The Journal of Law and History Review. *
prodigiously researched ... offers a vivid example of the ways that changing constructions of race intertwined with social and political conservatism in 1920s America * Anne M. Valk, Journal of American Studies *

Sharon Davies is the John C. Elam/Vorys Sater Designated Professor of Law at Ohio State University. A specialist in criminal law and procedure, she has published widely in prominent law journals and served as chairperson of the Criminal Justice Section of the Association of American Law Schools. She received a Senior Faculty Fellowship from Ohio State's Kirwan Institute for the Study of Race and Ethnicity to support her research for this book.

GOR008287524
Rising Road: A True Tale of Love, Race, and Religion in America by Sharon Davies
Sharon Davies
Used - Very Good
Hardback
Oxford University Press Inc
2010-02-25
352
0195379799
9780195379792
N/A
Book picture is for illustrative purposes only, actual binding, cover or edition may vary.
This is a used book - there is no escaping the fact it has been read by someone else and it will show signs of wear and previous use. Overall we expect it to be in very good condition, but if you are not entirely satisfied please get in touch with us.