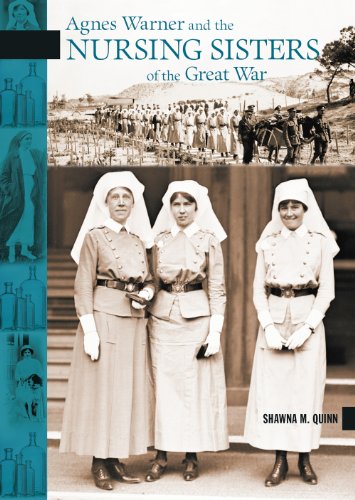 Agnes Warner and the Nursing Sisters of the Great War
by Shawna M. Quinn

Out of Stock
$28.49
inc. GST
Includes Nursing Sister Agnes Warner's wartime letters which were published under the title "My Beloved Poilus."
Very Good
Only 0 left

Agnes Warner and the Nursing Sisters of the Great War Summary

Agnes Warner and the Nursing Sisters of the Great War by Shawna M. Quinn

Through ear-splitting, thunderous explosions and fearful eerie flashes in the distance, the nurses of the Canadian Army Nursing Service in World War I waited for the inevitable arrival of wounded soldiers. At the Casualty Clearing Houses, they worked at a feverish pace to give emergency care for bleeding gashes, broken and missing limbs, and the devastating injuries of war. Exploring the many ways in which trained and volunteer nurses gave their time, talents, and even their lives to the First World War effort, Shawna M. Quinn considers the experiences of New Brunswick's nursing sisters -- the gruelling conditions of work and the brutal realities they faced from possible attacks and bombings. Using letters, diaries, and published accounts, Quinn paints a complete picture of the adventurous young women who witnessed first-hand the horrors of the Great War.

Agnes Warner and the Nursing Sisters of the Great War Reviews

"This volume, the latest in the New Brunswick Military Heritage Project, should find a diverse readership among those interested in local history, as well as those who enjoy learning more about Canada's role in the Great War." - Virginia Beaton - Atlantic Books Today - 20110401
"Quinn's work is a valuable contribution in furthering our understanding of the experience and diverse responsibilities of nursing sisters in the Great War." - Kathryn Rose - Canadian Military History - 20110510
"Agnes Warner joins the roster of only a handful of books that recount the firsthand experiences of Canadian nursing sisters in the First World War and is a worthy addition to that literature." - John Boileau - Chronicle Herald - 20110313
"An excellent addition to any military history collection." - Midwest Book Review - 20110204

A native of Keswick Ridge, New Brunswick, Shawna M. Quinn holds a BSc in biology-psychology (1999) and an MA in history (2006) from the University of New Brunswick. After earning the David Alexander Prize in 2004 for her undergraduate essay on a nineteenth-century school inspector, she began her graduate research examining the private and public priorities of inspectors for her thesis, "aSympathetic and Practical Mena? School Inspectors and New Brunswick's Educational Bureaucracy, 1879-1909" (2006). In a concurrent project, she surveyed the contributions of several women to the growth of New Brunswick's provincial museum, featuring their efforts online in a virtual exhibit entitled "Progress and Permanence: Women and the New Brunswick Museum, 1880-1980." One of these women was Nursing Sister Agnes Warner. Shawna's interest in history extends also to historical interpretation and preservation. She spent several seasons developing and leading educational support at Kings Landing Hist

GOR010250578
Agnes Warner and the Nursing Sisters of the Great War by Shawna M. Quinn
Shawna M. Quinn
Used - Very Good
Paperback
Goose Lane Editions
2010-10-29
174
0864926332
9780864926333
N/A
Book picture is for illustrative purposes only, actual binding, cover or edition may vary.
This is a used book - there is no escaping the fact it has been read by someone else and it will show signs of wear and previous use. Overall we expect it to be in very good condition, but if you are not entirely satisfied please get in touch with us.