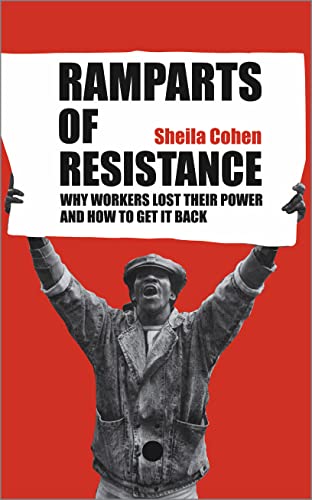 Ramparts of Resistance
by Sheila Cohen

Out of Stock
$22.49
inc. GST
A critical history of grasssroots labour struggles from the 1970s to today that calls for a new politics of trade unionism.
Very Good
Only 0 left

Ramparts of Resistance: Why Workers Lost Their Power, and How to Get It Back by Sheila Cohen

Ramparts of Resistance examines the experience of British and US workers during the last three decades to show the urgency of the need for a new independent politics of trade unionism.

The twentieth century saw great changes in the trade union movement, from waves of strikes in the 1970s to a battery of employer and state onslaughts, culminating in the anti-union legislation of the 1980s and 1990s. Looking at grassroots labour struggles, Cohen explores issues of reformism, trade union democracy and the political meaning of ordinary workplace resistance, and puts forward ideas for change.

Ramparts of Resistance examines the failure of the union movement to rise to the neo-liberal challenge and calls for a new politics of independent unionism and an explicitly class-based renewal of workers' power. Coming at a time when union activity and membership involvement continues despite the odds, this book is an inspiring guide to the direction that unionism should take.

Sheila Cohen has been involved in the trade union movement for more than a decade. She is the author of Ramparts of Resistance (Pluto, 2006) and co-author of The Everlasting Staircase (Pluto, 2009). She has taught courses on Labour and Trade Union Studies at London Metropolitan University and at the Center for Worker Education in New York.

GOR005249329
Ramparts of Resistance: Why Workers Lost Their Power, and How to Get It Back by Sheila Cohen
Sheila Cohen
Used - Very Good
Paperback
Pluto Press
2006-11-30
264
0745315291
9780745315294
N/A
Book picture is for illustrative purposes only, actual binding, cover or edition may vary.
This is a used book - there is no escaping the fact it has been read by someone else and it will show signs of wear and previous use. Overall we expect it to be in very good condition, but if you are not entirely satisfied please get in touch with us.