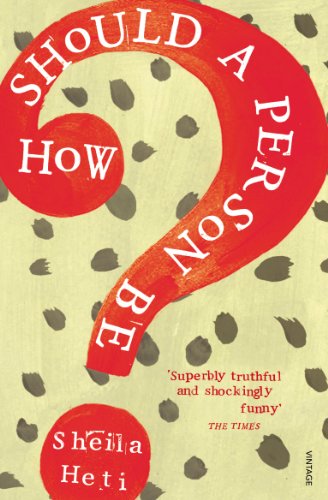 How Should a Person Be?
by Sheila Heti

Longlisted for the Women's Prize for Fiction 2013

Sheila's twenties were going to plan.

So Sheila abandons her marriage and her play, befriends Margaux, a free and untortured painter, and begins sleeping with the dominating Israel, who's a genius at sex but not at art.

How Should a Person Be? Summary

How Should a Person Be? by Sheila Heti

Longlisted for the Women's Prize for Fiction 2013

Sheila's twenties were going to plan.

She got married.
She hosted parties.
A theatre asked her to write a play.

Then she realised that she didn't know how to write a play.
That her favourite part of the party was cleaning up after the party.
And that her marriage made her feel like she was banging into a brick wall.

So Sheila abandons her marriage and her play, befriends Margaux, a free and untortured painter, and begins sleeping with the dominating Israel, who's a genius at sex but not at art. She throws herself into recording them and everyone around her, investigating how they live, desperate to know, as she wanders, How Should a Person Be?

How Should a Person Be? Reviews

Helen Fielding made it funny and fictional in Bridget Jones's Diary; Elizabeth Gilbert did it without laughs in Eat, Pray, Love. Now in this mashup of memoir, fiction, self-help and philosophy, Sheila Heti has added a bit of a story, quite a few blow jobs and some cheeky exclamation marks, and finally made it credible * Guardian *
A really amazing metafiction-meets-nonfiction novel * Lena Dunham, star and creator of HBO series 'Girls' *
A beguiling "novel from life" about creativity and authenticity * Guardian Pick of 2013 *
Funny, bawdy and fiercely original, this is the book everyone's talking about - and for good reason * Easy Living *
A shamelessly funny read that's got all of America talking * Grazia *
Part of a growing movement to explore the messiness, self-consciousness and doubt of young women who have been told the world offers them unprecedented opportunity, and who are discovering just what that means -- Kira Cochrane * G2 *
It will be one of the most talked-about books of 2013 * Irish Tatler, 2013 Hot List *
Original...hilarious... Part confessional, part play, part novel, and more-it's one wild ride...Think HBO'S Girls in book form * Marie Claire *
Utterly beguiling: blunt, charming, funny, and smart. Heti subtly weaves together ideas about sex, femininity and artistic ambition. Reading this genre-defying book was pure pleasure * David Shields, author of Reality Hunger *

Sheila Heti is the author of several books of fiction, including The Middle Stories and Ticknor, and a book of "conversational philosophy" called The Chairs Are Where the People Go, written with Misha Glouberman, which was chosen by The New Yorker as a best book of 2011. Her writing has appeared in The New York Times, Bookforum, McSweeney's, n+1, The Guardian, and other places. She lives in Toronto.

GOR005568832
How Should a Person Be? by Sheila Heti
Sheila Heti
Used - Very Good
Paperback
Vintage Publishing
2014-03-03
320
0099583569
9780099583561
Short-listed for Encore Award 2014 (UK) Long-listed for Women's Prize for Fiction 2013 (UK)
Book picture is for illustrative purposes only, actual binding, cover or edition may vary.
This is a used book - there is no escaping the fact it has been read by someone else and it will show signs of wear and previous use. Overall we expect it to be in very good condition, but if you are not entirely satisfied please get in touch with us.