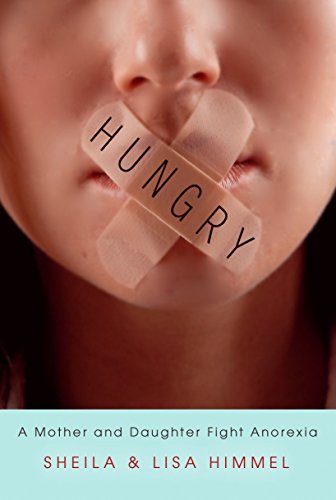 Hungry: A Mother and Daughter Fight Anorexia by Sheila Himmel

A unique eating-disorder memoir written by a mother and daughter.

Unbeknownst to food critic Sheila Himmel-as she reviewed exotic cuisines from bistro to brasserie- her daughter, Lisa, was at home starving herself. Before Sheila fully grasped what was happening, her fourteen-year-old with a thirst for life and a palate for the flavors of Vietnam and Afghanistan was replaced by a weight-obsessed, antisocial, hundredpound nineteen-year-old. From anorexia to bulimia and back again-many times-the Himmels feared for Lisa's life as her disorder took its toll on her physical and emotional well-being.

Hungry is the first memoir to connect eating disorders with a food-obsessed culture in a very personal way, following the stumbles, the heartbreaks, and even the funny moments as a mother-daughter relationship-and an entire family-struggles toward healing.

"As the family stumbles towards recovery, the book winds down with mother and daughter (Lisa is now in her early 20s) expressing hope for the future. There may still be a bumpy road ahead, but the mere fact of Lisa's survival, and the revelation that healing is possible, will provide comfort for many families on the same path."
-CURVE Magazine

"HUNGRY illustrates that, whether the problem concerns food, drug abuse, or alcoholism, even amid the depths of pain and despair healing becomes possible when the desire for it is real and strong."
-San Jose Mercury News

A courageous account of what it is like to exist with a life-threatening eating disorder from two quite different standpoints-Lisa, the daughter who stops eating, and her mother Sheila, a restaurant critic. The irony of this situation is lost on neither, and both are unsentimental and deeply honest about their experience. I especially admire their separate advice for how best to support recovery. This book should comfort anyone confronted with this illness as well as provide much practical help for dealing with it. "
-Marion Nestle, author of Food Politics and What to Eat

"Sheila and Lisa Himmel put on paper-with rare vulnerability, wit, and courage- what millions of American mothers and daughters face privately, but fear speaking about in public. Their capacity to mine the depths of Lisa's struggle with eating disorders and Sheila's struggle with Lisa will undoubtedly bring an overwhelming sense of relief and recognition to so many mother-daughter pairs trying to make sense of so much pain. Perhaps most admirable, blame is never a weapon in this extremely personal memoir. Instead, these brave women acknowledge the complex sources of illness and point a way toward real, messy, tentative, hopeful recovery."
-Courtney Martin, author of Perfect Girls, Starving Daughters

"An engrossing look at the power of food and eating. Mother and daughter have given us a deeply personal story about what happens when that power overwhelms."
-David A. Kessler, MD, author of The End of Overeating and former Commissioner, FDA

"Hungry covers a deadly and serious topic in a poignant story that addresses the irony of our culture's obsession with food. Sheila Himmel brings her talent as a journalist and food critic to show intimately how this disorder took over her family's life for the eight years that daughter Lisa suffered from a spectrum of disordered eating-from anorexia to bulimia to anorexia. As Sheila notes, 'eating disorders function like addictions, but no you can't 'just say no' to food, especially in our culture where...America is a 24-hour buffet.' [The] Himmels bravely share their ups and downs, with honesty and sometimes even humor. Mother and daughter both learned a lot during the recovery process and report on helpful resources they found along the way. I love that the book ends with an optimistic tone and their two lists on '10 Things we learned about eating disorders.' I highly recommend this first-hand and easy-to-ready mother/daughter account of a complex illness that will provide comfort, insight, and support for anyone struggling with or affected by an eating disorder."
-Janice Bremis, executive director Eating Disorders Resource Center

"Through their honest and compelling story, the Himmels reveal the human impact of eating disorders from multiple perspectives: Sheila as a mother and professional reporter and Lisa as a daughter and eating disorder sufferer and survivor. This book is a gift to anyone who wants a deeper understanding of this often misunderstood disease."
-Ellie Krieger, registered dietitian and author of The Food You Crave

Sheila Himmel is an award-winning food critic, writer, and editor. She served as the food writer for the San Jose Mercury News. Her prize-winning articles have been featured in publications such as the Washington Post and USA Today. Sheila currently lives in Palo Alto, California, with her husband, Ned, and their two children, Jake and Lisa.

Lisa Himmel is a graduate of the University of California, Santa Cruz with a degree in American studies. She plans to work in early childhood education. She is the coauthor, with her mother, Sheila Himmel, of Hungry: A Mother and Daugher Fight Anorexia.

GOR004248438
Hungry: A Mother and Daughter Fight Anorexia by Sheila Himmel
Sheila Himmel
Used - Very Good
Paperback
Unknown
0
0425227901
9780425227909
N/A
Book picture is for illustrative purposes only, actual binding, cover or edition may vary.
This is a used book - there is no escaping the fact it has been read by someone else and it will show signs of wear and previous use. Overall we expect it to be in very good condition, but if you are not entirely satisfied please get in touch with us.