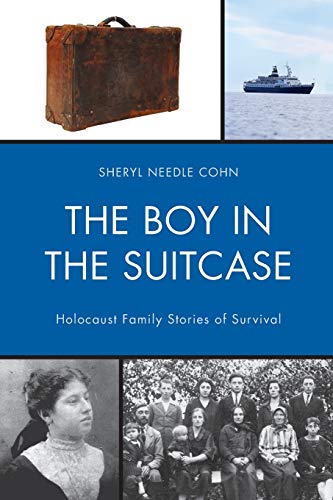 The Boy in the Suitcase
by Sheryl Needle Cohn

In Stock
$44.99
inc. GST
Each chapter within The Boy in the Suitcase tells a different story of families throughout the world who have been affected by the Holocaust. This book also covers the trauma of second generation children of Holocaust survivors. Intelligence, courage, and the will to survive permeate each remarkable chapter.
Very Good
Only 1 left

The Boy in the Suitcase Summary

The Boy in the Suitcase: Holocaust Family Stories of Survival by Sheryl Needle Cohn

The Boy in the Suitcase: Holocaust Family Stories of Survival is a uniquely different Holocaust book. It reads like an intriguing novel, such as the title chapter which tells the story of an infant smuggled out of Germany in a suitcase and raised in the Dominican Republic. Each chapter tells a different story of families throughout the world who have been affected by the Holocaust. This book also covers the trauma of second generation children of Holocaust survivors and the bravery of Christian families who hid Jewish children in Quaregnon, Belgium. The Boy in the Suitcase includes inspirational stories from nations such as Russia, Poland, France, Germany, Holland, Hungary, and the Dominican Republic. Intelligence, courage, and the will to survive permeate each remarkable chapter. Click here to view the book trailer!

The Boy in the Suitcase Reviews

It is important to continue to tell the stories of those brutally humiliated, tortured, and murdered during the Holocaust. . . . This book ensures that the innocent victims will no longer remain anonymous in their deaths. As the Maggid of her ancestral Dubno before her, Sheryl tells unique and inspirational stories in her book. In doing so, she honors the memory of the brave resistors, rescuers, and especially the families whose ultimate revenge is their continuance today. -- Zvi Bielski, son of Zus Bielski of the Bielski Brothers Brigade
I am breathless! I had my family read our chapter and we are overwhelmed. Thank you for doing this and for asking me to take part. This book is a legacy that I would be proud to leave my children. -- Shirley, second generation daughter of survivors
I just have to tell you how much I admire Sheryl's intellectual curiosity, talent, appreciation for heritage and history, determination, and energy. -- Shelley, Blogger

Sheryl Needle Cohn, Ed.D, is a faculty member at the University of Central Florida. She is the author of the fictional illustrated children's series, The Salamander Stories. Dr. Cohn is also a playwright. Her reader's theater production of Bella's Story, from Pogrom to Holocaust has been performed by drama students in high schools, history and education majors in colleges, book clubs, and members of religious and secular organizations. Her research interests include Holocaust education and global genocide.

Acknowledgments Foreword Introduction Chapter 1 Dubno: From Russian Pogroms to the Holocaust Chapter 2 The Shtetls of Belorussia Chapter 3 A Baby Girl, a German Displaced Persons Camp, and the Hope of a Nation Chapter 4 A Second Generation Perspective, Trauma, and Success Chapter 5 Au Revoir Les Juifs de Paris Chapter 6 A Baker's Loaf of Life: A Generation Saved by the Resistance in Quaregnon, Belgium Chapter 7 Shattered Childhoods in Hiding: Dutch Resistors, a Baron, and a Fairytale Castle Chapter 8 Exodus From Budapest: Surviving Religious and Political Persecutions . . .Five Times Chapter 9 The Boy in the Suitcase: Sosua Dominican Republic Chapter 10 We Are Here! Author's Disclaimer Bibliography Index About the Author

GOR010506992
The Boy in the Suitcase: Holocaust Family Stories of Survival by Sheryl Needle Cohn
Sheryl Needle Cohn
Used - Very Good
Paperback
University Press of America
2011-12-09
108
0761857060
9780761857068
N/A
Book picture is for illustrative purposes only, actual binding, cover or edition may vary.
This is a used book - there is no escaping the fact it has been read by someone else and it will show signs of wear and previous use. Overall we expect it to be in very good condition, but if you are not entirely satisfied please get in touch with us.