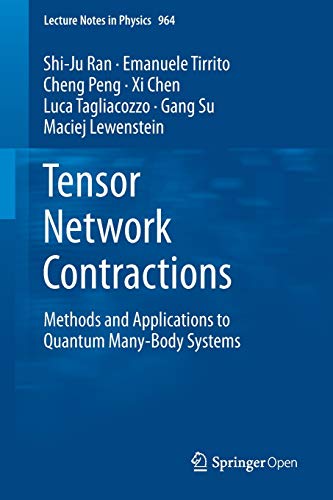 Tensor network is a fundamental mathematical tool with a huge range of applications in physics, such as condensed matter physics, statistic physics, high energy physics, and quantum information sciences.

Tensor network is a fundamental mathematical tool with a huge range of applications in physics, such as condensed matter physics, statistic physics, high energy physics, and quantum information sciences. This open access book aims to explain the tensor network contraction approaches in a systematic way, from the basic definitions to the important applications. This book is also useful to those who apply tensor networks in areas beyond physics, such as machine learning and the big-data analysis.

Tensor network originates from the numerical renormalization group approach proposed by K. G. Wilson in 1975. Through a rapid development in the last two decades, tensor network has become a powerful numerical tool that can efficiently simulate a wide range of scientific problems, with particular success in quantum many-body physics. Varieties of tensor network algorithms have been proposed for different problems. However, the connections among different algorithms are not well discussed or reviewed. To fill this gap, this book explains the fundamental concepts and basic ideas that connect and/or unify different strategies of the tensor network contraction algorithms. In addition, some of the recent progresses in dealing with tensor decomposition techniques and quantum simulations are also represented in this book to help the readers to better understand tensor network.

This open access book is intended for graduated students, but can also be used as a professional book for researchers in the related fields. To understand most of the contents in the book, only basic knowledge of quantum mechanics and linear algebra is required. In order to fully understand some advanced parts, the reader will need to be familiar with notion of condensed matter physics and quantum information, that however are not necessary to understand the main parts of the book. This book is a good source for non-specialists on quantum physics to understand tensor network algorithms and the related mathematics.

"This book is particularly suitable for students and researchers who are new in this field. It is a timely book that provides a concise introduction of the important topics in this brand-new field with promising prospects. Furthermore, the book provides an up-to-date brief review, which is well suited as a reference for experience researchers." (Hong-Hao Tu, zbMATH 1442.81003, 2020)

Shi-Ju Ran is an associate professor in the department of physics at Capital Normal University (CNU), Beijing, China. He obtained his bachelor's degree in the department of physics at Beijing Normal University, and his Ph.D. in the school of physics at University of Chinese Academy of Sciences. During 2015-2018, he worked as post-doctoral fellow at ICFO - the Institute of Photonic Sciences in Barcelona, Spain. His research interests include quantum many-body physics, tensor network algorithms, multi-linear algebra (tensor decompositions), and quantum machine learning. He is particularly enthusiastic about the highly inter-disciplinary researches, such as those between artificial intelligence and quantum physics.

Emanuele Tirrito obtained his Master's degree in theoretical physics in 2014 at Pisa University. In 2015 he joined the Institute of Photonic Sciences in Castelledefels as a PhD student under Prof. Maciej Lewenstein's supervision. In 2018 he was a visiting student at Johannes Gutenberg Universitat in Mainz.

Cheng Peng is a postdoc scholar at the Stanford Institute for Materials and Energy Sciences (SIMES). Her research focuses on strongly correlated systems through numeric methods. She was a visiting student at ICFO in 2016. She obtained her Doctor degree of theoretical physics at University of Chinese Academy of Sciences in the year of 2018. She has been working mostly on applying matrix product state / matrix product operator (MPS/MPO) based density matrix renormalization group and tensor network algorithms to study a variety of spin and fermionic systems.

Xi Chen obtained his PhD in theoretical physics in 2019. He has been working mostly on frustrated spin system, quantum spin liquid and topological ordered states by utilizing tensor network methods. He has published several peer-reviewed articles in international journals.

His research focuses on the quantum many-body problem in and out of equilibrium using tensor networks and quantum simulations. He also actively works on the connections of these approaches to statistical mechanics and high-energy physics.

Maciej Lewenstein (Warsaw 1955) graduated at Warsaw University in 1978. He joined the Centre for Theoretical Physics of the Polish Academy of Sciences in Warsaw, where he remained for 15 years, becoming a professor in 1993. He finished his PhD in Essen in 1983 and habilitated in 1986 in Warsaw. He has spent several long term visits at Universitat Essen, at Harvard University with Roy J. Glauber (Nobel 2005), at Commisariat a l'Energie Atomique in Saclay and at Joint Institute for Laboratory Astrophysics at Boulder. He was on faculty of CEA in Saclay (1995-1998), of the Leibniz University Hannover (1998-2005). In 2005 he moved to Catalonia as ICREA Research Professor to lead the quantum optics theory at the Institut de Ciencies Fotoniques in Castelldefels. His interests include quantum optics, quantum physics, quantum information, attosecond science, and statistical physics. His other passion is jazz and avant-garde music - he is an acclaimed jazz writer and critic.