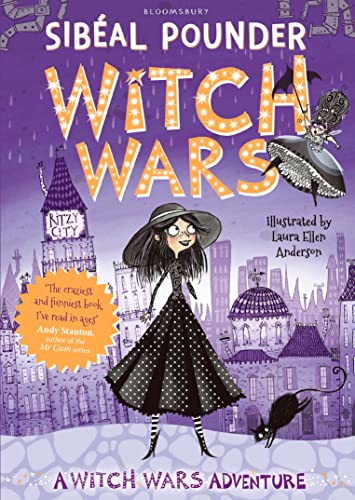 When Fran the Fabulous Fairy turns up in Tiga Whicabim's shed to tell her she's a witch, Tiga doesn't believe her. Or at least not until Fran points out that TIGA WHICABIM is actually an anagram of I AM A BIG WITCH and magics her away down the drainpipes to compete in Witch Wars - the competition to crown the next Top Witch of Ritzy City. Filled with silly spells, delectable dresses, ridiculous riddles and a serious shoe problem, Witch Wars is a witch story like no other. Although if you enjoyed The Worst Witch, you'll love this too!

Silly spells, delectable dresses, magical mishaps and ridiculous riddles, this is a witch story like no other - and it's a blast! * Bookseller *
A completely fresh and fun take on witches, Witch Wars is for anyone who likes magic, adventure, fashion or a fabulous story * Booktrust *
Fun, friendship, fabulous illustrations * Parents in Touch *

Sibeal Pounder used to work for the Financial Times, where she researched for the How To Spend It section and wrote the For Goodness' Sake column - interviewing everyone from Veronica Etro to Vivienne Westwood. Now she writes about fabulous witches and feisty fairies in Witch Wars, her much loved series for Bloomsbury. Other writing credits include Vogue.com and fashion trend forecasting company WGSN, and she volunteers at the Media Trust, teaching kids who want to get into journalism. Sibeal studied History at St Andrews, Publishing at City, Quentin Tarantino films at Yale and recently completed the Faber Academy's Writing for Children course. Sibeal's first book WITCH WARS, was shortlisted for the Waterstones Children's Book Prize 2016. Laura Ellen Anderson is a professional children's book author and illustrator, with an increasing addiction to coffee (that is when she's not trying to take over the world or fighting sock-stealing monsters). She spends every waking hour creating and drawing and would quite like to live on the moon when humans finally make it possible.

GOR006765788
Witch Wars by Sibeal Pounder
Sibeal Pounder
Witch Wars
Used - Very Good
Paperback
Bloomsbury Publishing PLC
2015-03-12
288
1408852659
9781408852651
Short-listed for Waterstones Children's Book Prize: Younger Fiction 2016
Book picture is for illustrative purposes only, actual binding, cover or edition may vary.
The book has been read, but looks new. The book cover has no visible wear, and the dust jacket is included if applicable. No missing or damaged pages, no tears, possible very minimal creasing, no underlining or highlighting of text, and no writing in the margins.