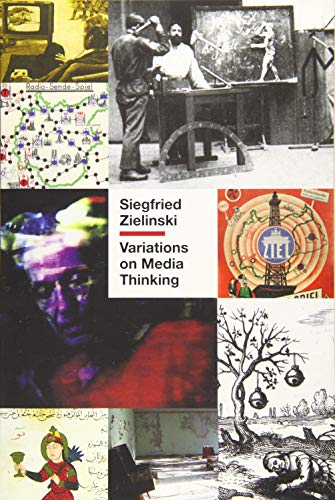 A diverse, enriching volume of media analysis from a pioneering thinker in the field

Expanding on Siegfried Zielinski's groundbreaking inquiry into deep time of the media, the essays in Variations on Media Thinking further the eminent media theorist's unique method of expanded hermeneutics, which means for him interpreting technical artifacts as essential parts of our cultural lives. Covering such topics as the televisualized Holocaust, the ubiquity of media today, the Internet, the genealogy of sound art, and history's first hacker movement, these essays further diversify Zielinski's insight into the hidden layers of media development, which he first articulated in his pioneering work Deep Time of the Media.

Including many previously untranslated and scarce essays, these written time machines open new lines of investigation for cultural scholars. From the automata of the Arabic-Islamic Renaissance (800-1200) to the largest and loudest techno-event ever, known as The Symphony of Sirens-which transformed Baku in 1922 into an immense music box of modern noise-Variations on Media Thinking covers Zielinski's inquiries since 1975. Richly illustrated and full of provocation, brilliant insight, and fascinating research, this volume is perfect for students of media archaeology, philosophy, and technology, as well as any adventurous, rigorous thinkers engaged with culture and media.

Siegfried Zielinski is Michel Foucault Professor at The European Graduate School in Saas Fee and chair for Archaeology and Variantology of Art and Media at Berlin University of the Arts (i.r.). He is author of Deep Time of the Media: Toward an Archaeology of Hearing and Seeing by Technical Means (2006), which has been translated into many languages, and [...After the Media]: News from the Slow-Fading Twentieth Century (Univocal/Minnesota, 2013).