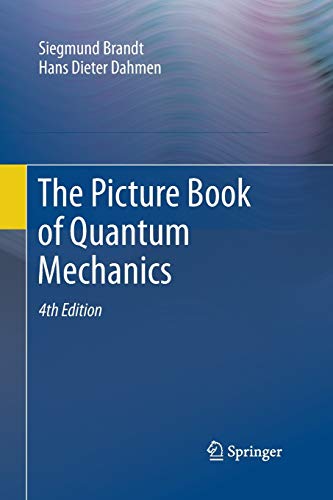 The Picture Book of Quantum Mechanics by Siegmund Brandt

In its expanded 4th edition, this book explains the basic concepts and phenomena of quantum mechanics by means of computer-generated color illustrations, illuminating the relationship between quantum mechanics and classical physics.

The Picture Book of Quantum Mechanics by Siegmund Brandt

The aim of this book is to explain the basic concepts and phenomena of quantum mechanics by means of visualisation. Computer-generated illustrations in color are used extensively throughout the text, helping to establish the relation between quantum mechanics-wave functions, interference, atomic structure, and so forth-and classical physics-point mechanics, statistical mechanics, and wave optics. Even more important, by studying the pictures in parallel with the text, readers develop an intuition for such notoriously abstract phenomena as:

Illustrations from experiments in a variety of fields, including chemistry, and molecular, atomic, nuclear, and particle physics, underline the basic as well as the practical importance of quantum mechanics. In the present, fourth edition all computer graphics are presented in full colour. It also contains additional physics topics such as hybridisation.

From the reviews of the fourth edition:

"This book is aimed at beginners in quantum mechanics who want to gain some insight into the various physical phenomena which happen at the (sub)atomic scale, and for which no daily experience is available. It will serve as a good complement to standard textbooks of quantum mechanics since it contains many carefully produced pictures to illustrate the fundamental concepts and ideas from quantum physics--highlighting in particular how the concepts and predictions of classical mechanics are altered and supplemented by wavelike behaviors." (Gabriel Stoltz, Mathematical Reviews, May, 2013)
Siegmund Brandt is Emeritus Professor of Physics at the University of Siegen, Germany.
Dr. Hans Dieter Dahmen is Professor Emeritus of Theoretical Physics at the University of Siegen, Germany.
Introduction.- Light Waves.- Probability Waves of Matter.- Solution of the Schroedinger Equation in One Dimension.- One-Dimensional Quantum Mechanics: Scattering by a Potential.- One-Dimensional Quantum Mechanics: Motion within a Potential, Stationary Bound States.- Quantile Motion in One Dimension.- Coupled Harmonic Oscillators: Distinguishable Particles.- Coupled Harmonic Oscillators: Indistinguishable Particles.- Wave Packet in Three Dimensions.- Solution of the Schroedinger Equation in Three Dimensions.- Three-Dimensional Quantum Mechanics: Scattering by a Potential.- Three-Dimensional Quantum Mechanics: Bound States.- Hybridization.- Three-Dimensional Quantum Mechanics: Resonance Scattering.- Coulomb Scattering.- Spin.- Examples from Experiment.- Simple Aspects of the Structure of Quantum Mechanics.- Two-Level System.- Analyzing Amplitude.- Wigner Distribution.- Gamma Function.- Bessel Functions and Airy Functions.- Poisson Distribution.- Index.
NLS9781493936953
9781493936953
1493936956
The Picture Book of Quantum Mechanics by Siegmund Brandt
Siegmund Brandt
New
Paperback
Springer-Verlag New York Inc.
2012-07-19
472
N/A
Book picture is for illustrative purposes only, actual binding, cover or edition may vary.
This is a new book - be the first to read this copy. With untouched pages and a perfect binding, your brand new copy is ready to be opened for the first time
Trustpilot