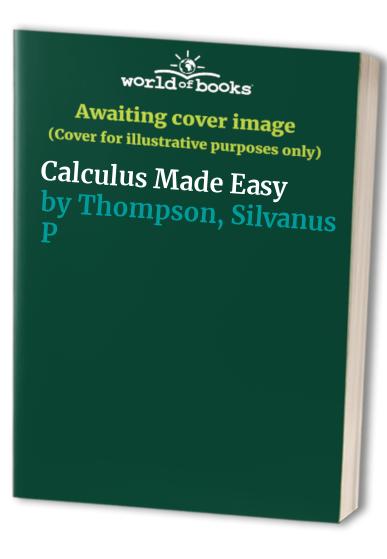 In Stock
$98.99
inc. GST
First published in 1910, this text aims to make the topic of calculus accessible to students of mathematics. Gardner has updated the text to reflect developments in method and terminology, written an extensive preface and three new chapters, and added more than 20 recreational problems.
Very Good
Only 4 left

Calculus Made Easy has been a classic introduction to the subject ever since it was first published by Silvanus P.Thompson in 1910.
In the first major revision of the text since 1946, Martin Gardner - the 'Mathematical Games' columnist for Scientific American and author of over 50 books and innumerable articles - has thoroughly updated the text to reflect recent developments in method and terminology, written an extensive preface and three new chapters, and added more than 20 recreational problems for practice and enjoyment. He has transformed this classic primer into a modern masterpiece that explains the timeless concepts of calculus in a contemporary and user-friendly voice.

'Martin Gardner is one of the great intellects produced in this country.' - Douglas Hofstadter 'For more than half a century, Martin Gardner has been the single brightest beacon defending rationality and good science.' - Stephen Jay Gould

MARTIN GARDNER is a regular reviewer for the New York Review of Books. He lives in Hendersonville, North Carolina.

Prologue.- To Deliver you from the Preliminary Terrors.- On Different Degrees of Smallness.- On Relative Growings.- Simplest Cases.- Next Stage: What to do with Constants.- Sums, Differences, Products and Quotients.- Successive Differentiation.- When Time Varies.- Introducing a Useful Dodge.- Geometrical Meaning of Differentiation.- Maxima and Minima.- Curvature of Curves.- Other Useful Dodges.- On True Compound Interest and the Law of Organic Growth.- How to Deal with Sines and Cosines.- Partial Differentiation.- Integration.- Integrating as the Reverse of Differentiating.- On Finding Areas by Integration.- Dodges, Pitfalls and Triumphs.- Finding Solutions.- A Little More about Curvature of Curves.- How to Find the Length of an Arc on a Curve.- Epilogue and Apologue.

GOR001383958
Calculus Made Easy by Silvanus P Thompson
Silvanus P Thompson
Used - Very Good
Paperback
Palgrave Macmillan
1999-03-22
336
0333772431
9780333772430
N/A
Book picture is for illustrative purposes only, actual binding, cover or edition may vary.
This is a used book - there is no escaping the fact it has been read by someone else and it will show signs of wear and previous use. Overall we expect it to be in very good condition, but if you are not entirely satisfied please get in touch with us.