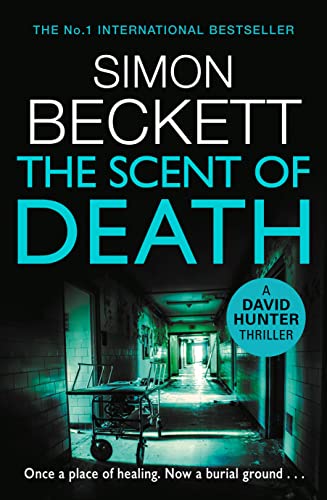 The Scent of Death by Simon Beckett

When a partially mummified corpse is found in the building's cavernous loft, forensics expert Dr David Hunter is called in to take a look. He can't say how long the body's been there, but he is certain it's that of a young woman. And that she was pregnant.

Then part of the attic floor collapses, revealing another of the hospital's secrets: a bricked-up chamber with beds inside. And some of them are still occupied.

For Hunter, what began as a straightforward case is about to become a twisted nightmare. And it soon becomes clear that St Jude's hasn't claimed its last victim . . .

Simon Beckett is the No.1 international bestselling author of the David Hunter series: The Chemistry of
Death, Written in Bone, Whispers of the Dead, The Calling of the Grave, The Restless Dead and The Scent of Death. His books have been translated into 29 languages, appeared in the Sunday Times top 10 bestseller lists and sold over 10 million copies worldwide. A former freelance journalist, he has written for The Times, Daily Telegraph, Independent on Sunday and Observer. The inspiration for the first David Hunter novel came after a visit to the world-renowned Body Farm in Tennessee introduced him to the work of forensic anthropologists.
Joint-winner (with Arne Dahl) of Europe's largest crime fiction prize - the Ripper Award 2018/19 - he has also won the Raymond Chandler Society's Marlowe Award and been short-listed for the CWA Gold Dagger, CWA Dagger in the Library and Theakston's Crime Novel of the Year awards. He is
also the author of several stand-alone novels including Stone Bruises and Where There's Smoke. Simon Beckett lives in Sheffield.

GOR009739599
9780593063491
059306349X
The Scent of Death: The chillingly atmospheric new David Hunter thriller by Simon Beckett
Simon Beckett
Used - Very Good
Hardback
Transworld Publishers Ltd
2019-04-18
368
N/A
Book picture is for illustrative purposes only, actual binding, cover or edition may vary.
This is a used book - there is no escaping the fact it has been read by someone else and it will show signs of wear and previous use. Overall we expect it to be in very good condition, but if you are not entirely satisfied please get in touch with us
Trustpilot