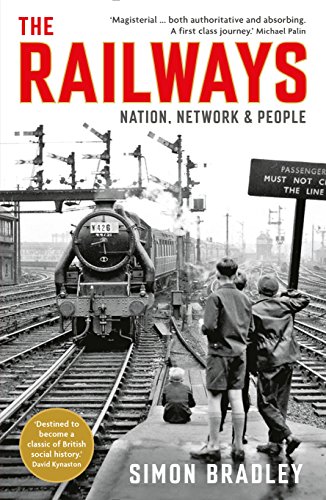 The Railways
by Simon Bradley

In Stock
$17.49
inc. GST
An extraordinary social history of Britain's rail networks and its people, that will appeal to railway enthusiasts and commuters.
Very Good Good
10 in stock

The Railways: Nation, Network and People by Simon Bradley

Sunday Times History Book of the Year 2015 Currently filming for BBC programme Full Steam Ahead Britain's railways have been a vital part of national life for nearly 200 years. Transforming lives and landscapes, they have left their mark on everything from timekeeping to tourism. As a self-contained world governed by distinctive rules and traditions, the network also exerts a fascination all its own. From the classical grandeur of Newcastle station to the ceaseless traffic of Clapham Junction, from the mysteries of Brunel's atmospheric railway to the lost routines of the great marshalling yards, Simon Bradley explores the world of Britain's railways, the evolution of the trains, and the changing experiences of passengers and workers. The Victorians' private compartments, railway rugs and footwarmers have made way for air-conditioned carriages with airline-type seating, but the railways remain a giant and diverse anthology of structures from every period, and parts of the system are the oldest in the world. Using fresh research, keen observation and a wealth of cultural references, Bradley weaves from this network a remarkable story of technological achievement, of architecture and engineering, of shifting social classes and gender relations, of safety and crime, of tourism and the changing world of work. The Railways shows us that to travel through Britain by train is to journey through time as well as space.

The Railways - history book of the year: Bradley's loving tribute to the golden age of the railway is a magnificent achievement ... a gorgeous Christmas pudding of a book ... Most eye-catching are the superbly crafted chapters on accidents and murders, yet where his book really shines is in its portraits of the British themselves ... His book is so colourful, so rich and engaging, that even if you don't like railways you should love it. -- Dominic Sandbrook * Sunday Times *
Simon Bradley's The Railways is magisterial. It's both authoritative and absorbing. A first class journey. -- Michael Palin
Rich and revealing ... [Bradley's] special delight is in ferreting out the telling, often surprising detail that brings the great themes of his story alive ... a monumental work. * Daily Telegraph *
Combining authority with intimacy, and technical grasp with humour and humanity, The Railways is by some distance the most ambitious and enriching book I have ever read on this subject. It is destined to become a classic of British social history. -- David Kynaston
'A superbly crafted, lovingly assembled tribute to our railways ... the current, tattered state of our railways should in no way detract from Bradley's narrative. This is a first-class, entertaining analysis of a great, albeit troubled, institution that has now been given a history worthy of its national significance.' -- Robin McKie * The Observer *
Bradley has written an authoritative and comprehensive history that entertains and informs in equal measure. This is a celebration of the railways that neither descends into nostalgia nor ventures into train-spotter land ... The reward for Bradley's ambition in writing a comprehensive social history of the railways is that his book will sit happily on the shelves next to railway classics such as Jack Simmons's The Railway in Town and Country, probably the nearest equivalent. This is definitely the book to give to that great uncle who you think is interested in trains. But it is also a fitting present for that railway buff who thinks he knows everything there is to know about the railways. This book will show he is mistaken. -- Christian Wolmar * Spectator *
A magnificent study ... Simon Bradley is not an ideal, but the ideal railway historian ... a rivetingly detailed technical history ... Masterly ... the joy of Bradley's book is that, by telling the story of railways, he has told the story of all of us British over the last 150 years. Turning the pages, we will cheer the ingenuity of the Victorians, curse the name of Beeching and Harold Macmillan, and recall the many moments of life - sobbing as one parted from a lover, delight as the train took us into new landscapes - in which the railways have played a central role. They made us what we are - both as a nation and as individuals, and this book is the classic, beautifully written, learned exposition of that glorious fact. -- AN Wilson * Sunday Times *
It is testament to Bradley's tremendous frame of reference that he is able to write with equal authority on both Branwell Bronte and Timothy Potter ...fascinating ... The entire book is written with a rare combination of easy-going style and Olympian knowledge ... Bradley is one of that happy band of writers who are interested in everything, and also - rarer still - capable of making everything interesting ... this book concertinas the present and the past, the real and the imagined, and, by doing so, turns what might have been Timothy Potter's trainspotter's guide into something much closer to a work of art. -- Craig Brown * Mail on Sunday *
Yields a plethora of delightful anecdotes and arcane facts. Bradley has a fine eye for the telling details ... a rich history ... as a work on railways and social life in the last two centuries it is a treasure trove. -- Jill Murdoch * BBC Who Do You Think You Are magazine *
A superb and challenging work of railway history, but it is also so much more ... It goes way beyond conventional, introverted, train-spottery literature and deals with some very unexpected themes ... Dr Bradley explodes many myths about the railways ... fascinating ... elegantly written, magisterial and utterly enthralling. -- Gavin Stamp * Country Life *
Books of the Year 2015: Bradley's compendious yet rattling The Railways achieves magnificently a difficult double. Learned and deeply researched, it will not only impress railway buffs but tell even them a great deal they didn't know; yet this is also popular history, which will engage and entertain any lay reader remotely curious about train travel in Britain. -- Matthew Parris * Spectator *
Simon Bradley entertainingly provides as much social history as industry detail to help today's curious passenger make sense of their past and present "parallel universe". Refreshingly, unlike some railway tomes, he doesn't take his love for the subject too seriously, even referring to a Viz comic character that took the mickey out of trainspotters ... an encyclopaedic book * Scotsman *
Daily Mail Books of the Year 2015: Now is probably a better time to read about trains than to ride in them. A magnificent, all-encompassing history ... It's a book that's both jaunty and scholarly - a rare combination - and packed with fascinating details right up to the present day. -- Craig Brown * Daily Mail *
Bradley's previous book was elegant enough, but here he blossoms as a writer both elegant and droll ... boldly conceived, protean and frequently beautiful. -- Andrew Martin * Times Literary Supplement *
Bradley was a train-spotter from the age of 11, and his enthusiasm for his subject shines through this wonderful history. An encyclopaedic and evocative study that's not just for trainspotters. -- PD Smith * Guardian *

Simon Bradley is joint editor of the celebrated Pevsner Architectural Guides, to which he has contributed a number of notable revised volumes. He started trainspotting aged eleven, and his interest in railways has broadened and endured. He is the author of St Pancras Station (Profile), and lives in London.

GOR007883088
The Railways: Nation, Network and People by Simon Bradley
Simon Bradley
Used - Very Good
Paperback
Profile Books Ltd
2016-10-06
655
1846682134
9781846682131
Short-listed for Longman/History Today Book of the Year Award 2016 (UK)
Book picture is for illustrative purposes only, actual binding, cover or edition may vary.
The book has been read, but looks new. The book cover has no visible wear, and the dust jacket is included if applicable. No missing or damaged pages, no tears, possible very minimal creasing, no underlining or highlighting of text, and no writing in the margins.