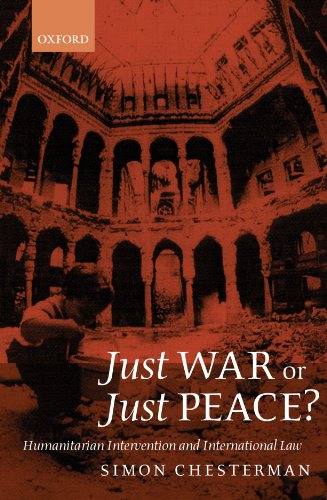 In Stock
$79.99
inc. GST
This volume, which won an ASIL Certificate of Merit in 2002, critically examines the right of humanitarian intervention, asserted most spectacularly by NATO during its 1999 air strikes over Kosovo.
Very Good
Only 1 left

The question of the legality of humanitarian intervention is, at first blush, a simple one. The Charter of the United Nations clearly prohibits the use of force, with the only exceptions being self-defence and enforcement actions authorized by the Security Council. There are, however, long-standing arguments that a right of unilateral intervention pre-existed the Charter. This book, which won the ASIL Certificate of Merit in 2002, begins with an examination of the genealogy of that right, and arguments that it might have survived the passage of the Charter, either through a loophole in Article 2(4) or as part of customary international law. It has also been argued that certain `illegitimate' regimes lose the attributes of sovereignty and thereby the protection given by the prohibition of the use of force. None of these arguments is found to have merit, either in principle or in the practice of states. A common justification for a right of unilateral humanitarian intervention concerns the failure of the collective security mechanism created after the Second World War. Chapters 4 and 5, therefore, examine Security Council activism in the 1990s, notable for the plasticity of the circumstances in which the Council was prepared to assert its primary responsibility for international peace and security, and the contingency of its actions on the willingness of states to carry them out. This reduction of the Council's role from substantive to formal partly explains the recourse to unilateralism in that decade, most spectacularly in relation to the situation in Kosovo. Crucially, the book argues that such unilateral enforcement is not a substitute for but the opposite of collective action. Though often presented as the only alternative to inaction, incorporating a `right' of intervention would lead to more such interventions being undertaken in bad faith, it would be incoherent as a principle, and it would be inimical to the emergence of an international rule of law.

Those looking to understand humanitarian intervention in historical perspective, to consider the relationship between humanitarian intervention and international law and to explore past and present episodes of interventions that purportedly had a humanitarian character are well advised to employ Simon Chesterman's book as a guide ... Chesterman's sobering argument should be read by those on both sides of the debate about the efficacy and legitimacy of humanitarian intervention. * Michael Barnett, University of Wisconsin, USA *
Dr Chesterman's new work is a useful corrective to those who would cheerily dissolve the distinction between legality and power, or between legal analysis and agitprop. ... [The] book provides legal and analytical tools that, hopefully, will help us differentiate between an excusable illegality, and yet another cynical usurpation of international law in the service of raison d'etat. * Melbourne University Law Review *
Review from previous edition In this lucid and insightful volume, Chesterman provides a sophisticated but accessible account of the historical and contemporary relationship between humanitarian intervention and international law. Just War or Just Peace? provides both an excellent teaching resource for advanced undergraduates and beyond, and a wealth of information for researchers and professionals working in this area. * African Affairs *
a tightly argued and complex presentation, with numbered, easily referenced topics in the style of a doctoral thesis (which it is). A more textured work [than Christine Gray's International Law and the Use of Force], it is arguably a more interesting read for an audience that does not already have at ready access the historical background or international law perspective to this difficult subject. It is also a more accessible work for students, and decidedly less dry and fragmented than many standard international law texts ... Dr Chesterman gives us a fairly riveting review of the history behind the modern rise of humanitarian intervention. * Books-on-Law *
Chesterman has written a tour de force that exposes the weaknesses of the arguments supporting a doctrine of unilateral humanitarian intervention in international society ... Chesterman rejects the claim that states have a legal right to act as vigilantes in support of Council resolutions, even if they believe that this is the only means to stop a genocide. The powerfully argued thesis of this scholarly work is that accepting this proposition in law is 'a recipe for bad policy, bad law, and a bad international order'. * International Affairs *

GOR001914789
Just War or Just Peace?: Humanitarian Intervention and International Law by Simon Chesterman (Associate, Associate, International Peace Academy, New York)
Simon Chesterman (Associate, Associate, International Peace Academy, New York)
Oxford Monographs in International Law
Used - Very Good
Paperback
Oxford University Press
2002-11-07
326
019925799X
9780199257997
Winner of ASIL Certificate of Merit 2002.
Book picture is for illustrative purposes only, actual binding, cover or edition may vary.
This is a used book - there is no escaping the fact it has been read by someone else and it will show signs of wear and previous use. Overall we expect it to be in very good condition, but if you are not entirely satisfied please get in touch with us.