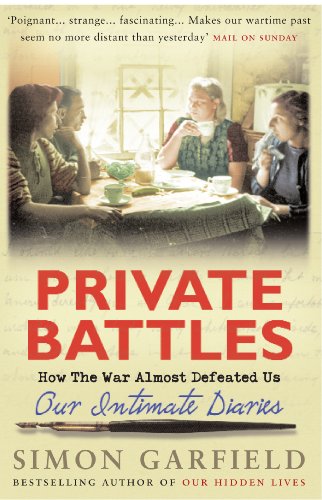 In Private Battles, award-winning writer Simon Garfield has skilfully interwoven the diaries of four ordinary people as they struggle to cope with the day-to-day reality of life during the Second World War.

Private Battles: Our Intimate Diaries: How the War Almost Defeated Us by Simon Garfield

In Private Battles, award-winning writer Simon Garfield has skilfully interwoven the diaries of four ordinary people as they struggle to cope with the day-to-day reality of life during the Second World War. Their voices combine to create one of the most compelling and refreshing takes on the period ever published.

Meet Maggie Joy Blunt, a perceptive but frustrated young writer living alone near Slough. Pam Ashford, a shipping clerk in Glasgow who writes of office life as if it were an episode of The Archers. Edward Stebbing, a 20-year-old discharged soldier living with a stern landlady in Essex. And Ernest Van Someren, a research chemist in Hertfordshire, father of two children and proposer of several unique scientific ways to beat the Nazis.

Perhaps here, for the first time, is the true story of how the ordinary people of Britain won the Second World War. And of how we almost didn't.

Poignant ... strange ... fascinating ... Makes our wartime past seem no more distant than yesterday * Mail on Sunday *
Enthralling * Observer *
A winning formula * Daily Telegraph *
I picked it up wih only mild curiosity - but I finished it in tears...No book I have ever read captures so roundly the experience of wartime life -- Nick Lezard * The Guardian *
their accounts of the incidentals of their lives make fascinating reading * The Sunday Times *
Simon Garfield is an award-winning feature writer on the Observer, and the author of eight books, including Our Hidden Lives, We Are At War, Mauve, The Wrestling, The Nation's Favourite and The End of Innocence: Britain in the Time of AIDS. Our Hidden Lives, his first collection of Mass Observation diaries, became a Sunday Times bestseller and BBC drama starring Richard Briers and Sarah Parrish.
GOR001671811
9780091910778
0091910773
Private Battles: Our Intimate Diaries: How the War Almost Defeated Us by Simon Garfield
Simon Garfield
Used - Very Good
Paperback
Ebury Publishing
2007-09-06
560
N/A
Book picture is for illustrative purposes only, actual binding, cover or edition may vary.
This is a used book - there is no escaping the fact it has been read by someone else and it will show signs of wear and previous use. Overall we expect it to be in very good condition, but if you are not entirely satisfied please get in touch with us
Trustpilot