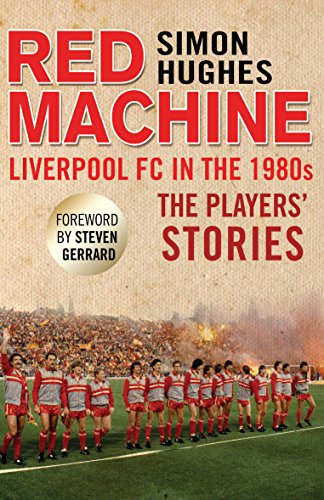 Red Machine: Liverpool FC in the '80s: The Players' Stories by Simon Hughes

During the 1980s, Liverpool Football Club dominated English football, winning six league titles, two European Cups, two FA Cups and four League Cups. In Red Machine, Simon Hughes interviews some of the most colourful characters to have played for the club during that period. The resulting interviews, set against the historical backdrop of both the club and the city, provide a vivid portrait of life at Liverpool during an era when the club's unparalleled on-pitch success often went hand in hand with a boozy social scene fraught with rows, fights and wind-ups. The players featured here include John Barnes, Bruce Grobbelaar, Howard Gayle, Michael Robinson, John Wark, Kevin Sheedy, Nigel Spackman, Steve Staunton, David Hodgson and Craig Johnston, as well as first-team coach Ronnie Moran. Their candid, ribald and sometimes scathing recollections provide an antidote to the media-coached, on-message interviews given by today's players and combine to offer a unique insight to this exciting time in the club's history.

Simon Hughes is a journalist and author. He covers Merseyside football for the Independent and has written for the Daily Telegraph and the Sunday Telegraph. His book Red Machine won the Antonio Ghirelli Prize for Italian Soccer Foreign Book of the Year 2014. His other titles include Secret Diary of a Liverpool Scout, Men in White Suits and Ring of Fire. He lives in Liverpool.

GOR006694353
Red Machine: Liverpool FC in the '80s: The Players' Stories by Simon Hughes
Simon Hughes
Used - Very Good
Paperback
Transworld Publishers Ltd
2014-08-14
272
1780576919
9781780576916
Winner of Premio Antonio Ghirelli 2014 (UK)
Book picture is for illustrative purposes only, actual binding, cover or edition may vary.
This is a used book - there is no escaping the fact it has been read by someone else and it will show signs of wear and previous use. Overall we expect it to be in very good condition, but if you are not entirely satisfied please get in touch with us.