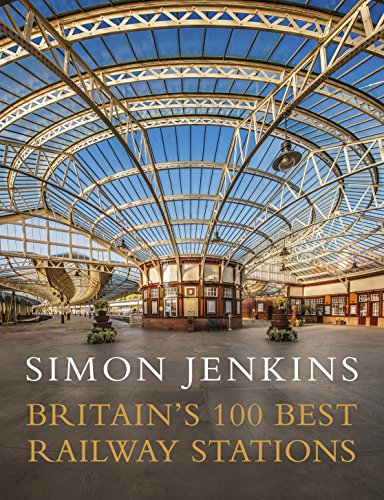 It is the scene for our hopeful beginnings and our intended ends, and the timeless experiences of coming and going, meeting, greeting and parting. It is an institution with its own rituals and priests, and a long-neglected aspect of Britain's architecture. And yet so little do we look at the railway station.

Simon Jenkins has travelled the length and breadth of Great Britain, from Waterloo to Wemyss Bay, Betws-y-Coed to Beverley, to select his hundred best. Blending his usual insight and authority with his personal reflections and experiences - including his founding the Railway Heritage Trust - the foremost expert on our national heritage deftly reveals the history, geography, design and significance of each of these glories.

Beautifully illustrated with colour photographs throughout, this joyous exploration of our social history shows the station's role in the national imagination; champions the engineers, architects and rival companies that made them possible; and tells the story behind the triumphs and follies of these very British creations.

These are the marvellous, often undersung places that link our nation, celebrated like never before.

[Spreads] enthusiasm by inviting the reader to join in a game of admiration. -- Christopher Howse * Telegraph *
However spectacular the book's photographs, it's the author's prowess as a phrase-maker that keeps you turning the pages -- Richard Morrison * The Times *
A most beautiful book . . . full of information. I'd like to travel to every one of the stations. Simon Jenkins is a blessing to the nation, keeping an eye on our buildings and making sure they are not forgotten or neglected. -- Claire Tomalin
Jenkins has unearthed a lot of gems. The photography is stunning -- Christian Wolmar * Spectator *
This is a cracker . . . a beautiful book -- Chris Evans
Simon Jenkins extols the virtues of 100 of them, as well as offering a brief history of the rise, fall and rise again of Britain's railways. And he is the perfect person to do so. Excellent, enticing. -- Gavin Stamp * Evening Standard *
This glorious and utterly essential guide to Britain's best railway stations is also a history of some of the remarkable - but often undersung - landmarks to our social history * The Bookseller *
Masterly, perhaps a masterpiece * Independent, Books of the Year on 'England's Thousand Best Churches' *
Every house in England should have a copy of this book -- Auberon Waugh on 'England's Thousand Best Churches' * Literary Review, Book of the Century *
Jenkins is, like all good guides, more than simply informative: he can be courteous and rude, nostalgic and funny, elegant, convincing and relaxed' -- Adam Nicolson on 'England's Thousand Best Houses' * Evening Standard *
Any passably cultured inhabitant of the British Isles should ask for, say, three or four copies of this book -- Max Hastings on 'England's Thousand Best Houses' * Sunday Telegraph *
Full of stand-out facts . . . absolutely fascinating -- Richard Bacon on 'A Short History of England' * BBC Radio 2 *
Full of the good judgements one might hope for from such a sensible and readable commentator, and they alone are worth perusing for pleasure and food for thought -- Michael Wood on 'A Short History of England' * New Statesman *
Jenkins has travelled the length and breadth of Great Britain's railways. Beautifully illustrated with colour photos, this is an uplifting exploration of our social history * The Guardian *
The supreme champion of Britain's heritage -- Alan Titchmarsh

GOR008764237
Britain's 100 Best Railway Stations by Simon Jenkins
Simon Jenkins
Used - Very Good
Hardback
Penguin Books Ltd
2017-09-28
336
024197898X
9780241978986
N/A
Book picture is for illustrative purposes only, actual binding, cover or edition may vary.
This is a used book - there is no escaping the fact it has been read by someone else and it will show signs of wear and previous use. Overall we expect it to be in very good condition, but if you are not entirely satisfied please get in touch with us.