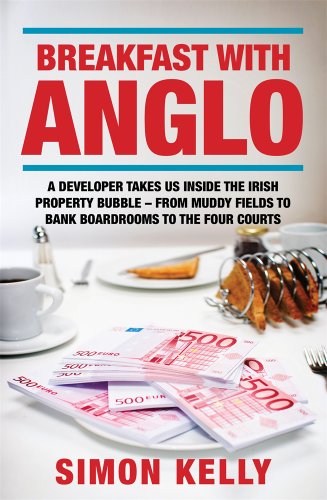 Breakfast with Anglo
by Simon Kelly

Used Price
$39.99
inc. GST
Free Shipping in Australia
The author's involvement in property development began when, in the 1980s, he started making spreadsheets for his father, the developer Paddy Kelly. By 2008, when the Irish property market crashed, he and Paddy owed their creditors nearly a billion euro. In this book, he gives an account of how it all worked and why it went sour.
Very Good Good

Breakfast with Anglo by Simon Kelly

Simon Kelly's involvement in property development began when, as a computer-mad child in the 1980s, he started making spreadsheets for his father, the developer Paddy Kelly. By 2008, when the Irish property market crashed, Simon and Paddy owed their creditors nearly a billion euro. In 2009, they were the first big developers to admit they were bust - and they encouraged their fellow developers to face reality in the same way. In 2010, in the pages of a national newspaper, Simon Kelly apologized for his part in the long-term damage created by the property bubble.

Until now, the story of Ireland's property boom and bust has been told only by people on the outside. The bankers and the developers have kept quiet. Now, Simon Kelly breaks the silence with this vivid and unsparing account of how it all worked and why it went sour. He brings us to the muddy fields, humble cafes and grand dining rooms where the deals were made; he explains how it was that debt always begat more debt; and he takes us through the hitherto opaque portals of Anglo Irish Bank, the Kellys' main lender.

In an account packed with telling and indiscreet detail, Simon Kelly makes no excuses for ending up bust. He simply shows how it happened - to him, to other developers, to the banks, and to the country. In doing so, he courageously breaks ranks with the insiders who created this disaster, and who would prefer to blame 'international forces', bad luck, or one another. Breakfast with Anglo is a landmark in our national accounting of the present crisis, an essential read for anyone who wants to know how we got into this mess and how we might begin to think about getting out of it.

Simon Kelly is a former property developer. He lives in County Wicklow with his wife and children.