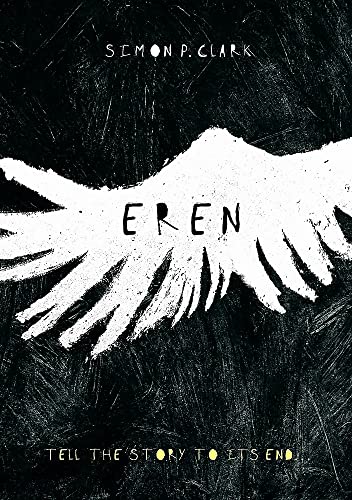 Used Price
$16,99
inc. GST
Free Shipping in Australia
A beautiful and unsettling debut novel for middle grade and up, in which a young boy learns all about the dangerous power of stories - sharing them, keeping them, and putting yourself within them.
Reviews:
Trustpilot
Very Good

'Tell the story to its end,' says Eren with a grin. His yellow eyes are glowing like embers in the night.
'When I reach the end,' I say, 'what happens? You'll have the whole story.'
'Hmm,' he says, looking at me and licking his lips with a dry, grey tongue. 'What happens then? Why don't we find out?'

People are keeping secrets from Oli. His mum has brought him to stay with his aunt and uncle in the countryside, but nobody will tell him why his dad isn't with them. Where is he? Has something happened? Oli has a hundred questions, but then he finds a secret of his own: he discovers the creature that lives in the attic...

Eren is not human.
Eren is hungry for stories.
Eren has been waiting for him.

Sharing his stories with Eren, Oli starts to make sense of what's happening downstairs with his family. But what if it's a trap? Soon, Oli must make a choice: learn the truth - or abandon himself to Eren's world, forever.

Eren caught my attention from the very first page. I really enjoyed it. Sure-footed, distinctive, strange, poetic. Simon P. Clark is a truly interesting new voice. -- David Almond, author of Skellig
This is a beautiful, illustrated short fables about the power of stories. * Financial Times *
Sure to appeal to older readers with a taste for the dark side, and probably to adults as well . . . This is an impressive debut from young author Simon P. Clark, who doesn't shy away from pushing his story to its darkest reaches. The ending will leave you shell-shocked. -- Rebecca Davies * Independent, TEEN BOOK OF THE MONTH *
Eren will both satisfy and excite your imagination. * The Bookseller 'Book of the Week' *
If you let the story in, let Eren in, I think you'll be delighted and horrified by the inevitable conclusion. * We Heart YA *
Dark, moody and easy to get lost in, Eren is a great book that makes audiences really wonder about the power of a good story. * The Sprout *
Eren is a sophisticated look at truth and lies and the area inbetween inhabited by stories. On the other, it's a simple tale of a family in crisis. You're never quite sure what to believe and it never quite feels that the ground is steady beneath your feet. It takes skill to juggle all these balls and still involve the reader to such an extent they can't put your book down, but Clark carries it off with aplomb. This is storytelling at its best. * The Book Bag *
Savvy readers and would-be writers will love this exploration of story as an art form, a panacea, and an endless part of life. * Kirkus Reviews *
Offering a spiral of stories within stories, this atmospheric first novel features a boy searching for truth, who gets sidetracked by a remarkable discovery. Echoing the surreal quality and settings of David Almond's books, this novel adeptly mixes fantasy with reality and leaves some pressing questions unanswered. * Publishers Weekly *
The magical realism and storytelling details will draw fantasy readers, who will find meaty substance and enough Britishisms to lend flavor. While the conclusion is entirely logical, it's unexpected and will spark discussion, challenging readers to reflect on the nature of both stories and reality. * Booklist *
A sinister debut novel . . . A chilling read reminiscent of Patrick Ness's books, Clark's novel will appeal to those who enjoy their fiction dark and disturbing. * School Library Journal *
Clark's novel can be placed in the company of David Almond's Skellig or Patrick Ness's A Monster Calls. It has all the elements of a great mystery, with some magical realism thrown in for good measure. This debut novel is truly wonderfully crafted. Poor Oli is a likable kid, and readers will connect with him immediately. Will Oli continue the story until the end, or will he stop before it is too late? Clark's haunting tale will leave you asking who needs whom more, the storyteller or the listener. * VOYA *

Simon P. Clark grew up in England, has taught English in Japan, and now lives in New Jersey. He is 28.

GOR007062007
Eren by Simon P. Clark
Simon P. Clark
Used - Very Good
Paperback
Little, Brown Book Group
2015-03-05
208
1472110986
9781472110985
N/A
Book picture is for illustrative purposes only, actual binding, cover or edition may vary.
This is a used book - there is no escaping the fact it has been read by someone else and it will show signs of wear and previous use. Overall we expect it to be in very good condition, but if you are not entirely satisfied please get in touch with us.