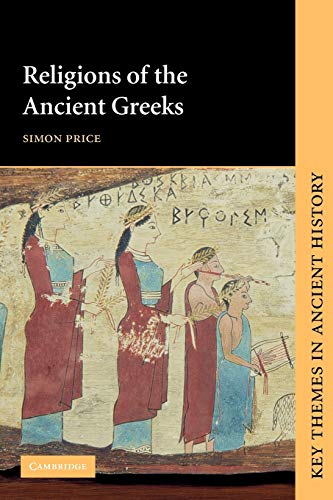 Religions of the Ancient Greeks
by Simon Price

In Stock
$16.49
+10% GST
This 1999 book describes the religious life of the Greeks from archaic times to the fifth century AD, looked at in the context of a variety of different cities and periods. It examines local practices and ideas in the light of general Greek ideas. The evidence is literary, inscriptional and archaeological.
Very Good
Only 3 left

Religions of the Ancient Greeks Summary

Religions of the Ancient Greeks by Simon Price

This 1999 book is about the religious life of the Greeks from the eighth century BC to the fifth century AD, looked at in the context of a variety of different cities and periods. Simon Price does not describe some abstract and self-contained system of religion or myths but examines local practices and ideas in the light of general Greek ideas, relating them for example, to gender roles and to cultural and political life (including Attic tragedy and the trial of Socrates). He also lays emphasis on the reactions to Greek religions of ancient thinkers - Greek, Roman, Jewish and Christian. The evidence drawn on is of all kinds: literary texts, which are translated throughout; inscriptions, including an appendix of newly translated Greek inscriptions; and archaeology, which is highlighted in the numerous illustrations.

Religions of the Ancient Greeks Reviews

'A fine addition to Cambridge University Press's Key Themes in Ancient History series, Price's intensive and authoritative survey will go straight to the top of the reading lists.' The Times Literary Supplement
' ... the only brief, up-to-date treatment of Greek religion from a sociological viewpoint widespread in the United States and England, and thus broadens a literature dominated by Continental scholars with different agenda.' Bryn Mawr Classical Review
"Price has admirably filled the long-standing need for a concise and up-to-date critical survey of the place of religious practice in Greek society....an exceptionally useful and stimulating book." Choice
"This book offers much diverse material for courses on Greek religion, a diversity greater than any comparable resource." Phoenix
"Not abstract and self-contained systems of religion or myths, but local practices and ideas of Greek religious life from the eigth century BC to the fifth century AD are what interest Price..." Reference & Research Book News
"[a] striking accomplishment." Journal of Religion

GOR001424368
Religions of the Ancient Greeks by Simon Price
Simon Price
Key Themes in Ancient History
Used - Very Good
Paperback
Cambridge University Press
1999-06-28
230
0521388678
9780521388672
N/A
Book picture is for illustrative purposes only, actual binding, cover or edition may vary.
This is a used book - there is no escaping the fact it has been read by someone else and it will show signs of wear and previous use. Overall we expect it to be in very good condition, but if you are not entirely satisfied please get in touch with us.