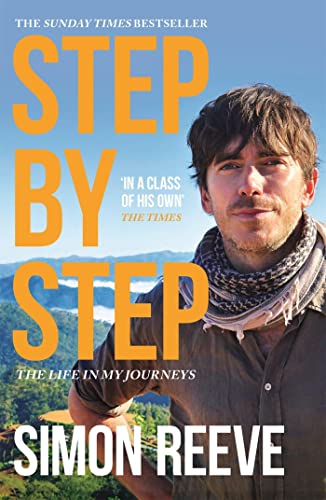 In Stock
$20.49
inc. GST
The inspiring memoir from TV traveller Simon Reeve's life of amazing adventures in over 120 countries and the most remote and extreme corners of the planet.
Very Good Good Well Read
28 in stock

Step By Step: The perfect gift for the adventurer in your life by Simon Reeve

'Incredibly honest... one of the best autobiographies I've ever read.' The Sun - best books of 2019

'His story reads like a fast-paced thriller.' Daily Mail

Cracking stories from his travels * Alastair Humphreys, Explorer and National Geographic Adventurer of the Year *
Reeve is a most likeable travelling companion, and the joy of the open road radiates from these pages * Times Literary Supplement *
You can be sure to trust Simon to find a fun story. Simon might just be the best tour guide in the world. * Sun *
Fascinating... a very honest account of the world as he has seen it, from Acton to the ends of the Earth * Geographical *
It is an account of his mind's journey to inner peace - and it is wonderfully life-affirming -- Max Pemberton * Daily Mail *
This vivid account of his fascinating, often hair-raising crusades feels more like an enthralling exchange over coffee with a friend than a formal autobiography. * Compass Magazine *
Genuinely interesting stories... remarkable * London Evening Standard *
Simon Reeve, a man whose very name is a guarantee of interesting television. Outstanding. * Observer *
TV's most interesting globetrotter * Independent *
The craziest (or bravest) man on TV * Daily Mail *
In the last decade, he's made a name for himself as British TV's most adventurous presenter. He's hunted with the Bushmen of Kalahari, hung out with biker outlaws in Australia and been taught to fish by the president of Moldova. * Radio Times *
Reeve is in a class of his own * The Times *

GOR009991611
Step By Step: The perfect gift for the adventurer in your life by Simon Reeve
Simon Reeve
Used - Very Good
Paperback
Hodder & Stoughton
2019-08-08
336
1473689120
9781473689121
N/A
Book picture is for illustrative purposes only, actual binding, cover or edition may vary.
This is a used book - there is no escaping the fact it has been read by someone else and it will show signs of wear and previous use. Overall we expect it to be in very good condition, but if you are not entirely satisfied please get in touch with us.