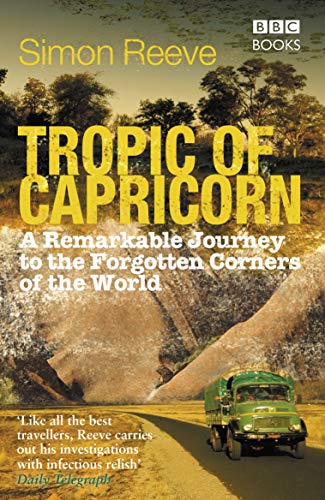 Tropic of Capricorn
by Simon Reeve

In Tropic of Capricorn, bestselling author Simon Reeve embarks on a 23,000-mile trek around the southernmost border of the tropics - a place of both amazing beauty and overwhelming human suffering.

Tropic of Capricorn by Simon Reeve

In Tropic of Capricorn, bestselling author Simon Reeve embarks on a 23,000-mile trek around the southernmost border of the tropics - a place of both amazing beauty and overwhelming human suffering. Heading east through Africa, Australia and South America, Simon encounters breathtaking landscapes and truly extraordinary people: from Bushmen of the Kalahari and Namibian prostitutes battling with HIV to gem miners in Madagascar and teenagers in the Brazilian favela once described as the most dangerous place on earth. It is a collection of daring adventures, strange rituals and exotic wildlife, all linked together by one invisible line.

Like the best travel writing, Tropic of Capricorn confronts important issues of our time - our changing environment, poverty, globalisation - by taking us on an unforgettable journey of discovery.

Like all the best travellers, Reeve carries out his investigations with infectious relish * Daily Telegraph *
Brilliant...a fascinating, illuminating journey...much more than a travelogue * Daily Mail *
A romping good travelogue * Wanderlust *

Simon Reeve, author and broadcaster, has travelled the world for a series of television documentaries including BBC series Equator and Places That Don't Exist. His first book, The New Jackals: Ramzi Yousef, Osama bin Laden and the future of terrorism, was a New York bestseller and the first in the world on bin Laden and al Qaeda. His second book, One Day in September: the story of the 1972 Munich Olympics massacre, was adapted for screen and won an Oscar for best feature documentary.

GOR001586790
Tropic of Capricorn by Simon Reeve
Simon Reeve
Used - Very Good
Paperback
Ebury Publishing
2009-02-05
400
1846073863
9781846073861
N/A
Book picture is for illustrative purposes only, actual binding, cover or edition may vary.
This is a used book - there is no escaping the fact it has been read by someone else and it will show signs of wear and previous use. Overall we expect it to be in very good condition, but if you are not entirely satisfied please get in touch with us.