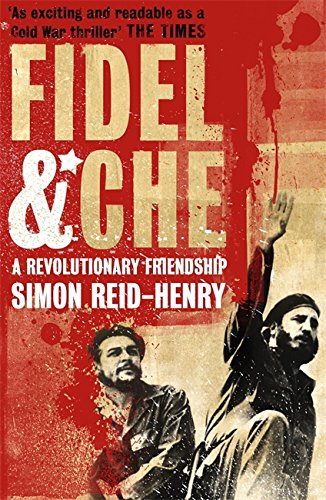 Fidel and Che
by Simon Reid-Henry

In Stock
$19.99
inc. GST
The first dual biography of the most remarkable political friendship of the twentieth century
Very Good Good
7 in stock

Fidel and Che: The Revolutionary Friendship Between Fidel Castro and Che Guevara by Simon Reid-Henry

FIDEL AND CHE is the story of the remarkable and revolutionary friendship between two of the most iconic figures in 20th century history - Fidel Castro and Ernesto (Che) Guevara.

Not yet thirty, Fidel Castro and Ernesto (Che) Guevara met in 1955 while both in exile in Mexico City. Guevara, the Argentine doctor plagued by asthma, had reached the end of the travels he began by motorcycle several years before. Fidel Castro, peasant's son, scholar and rebel, had just fled Cuba, fearing for his life. Over the next twelve years, until Guevara's death in 1967, their journey together would take them from the safe houses of Mexico's political underground, to war in the Cuban mountains and ultimately into the heart of the Cold War.

Drawing on extensive research, including declassified material and interviews with key figures in Havana, Moscow and Washington, Simon Reid-Henry uncovers, for the first time, the full story behind the central relationship of the Cuban revolution: their shared revolutionary ambitions, their conflicting personalities, the wilfulness that bound them together and the pressures that would tear them apart.

FIDEL AND CHE is set against the tide of revolution that swept across the world during the middle of the twentieth century. It is the story of two men who shared a common dream; who became friends, comrades and brothers-in-arms; and who, finally, would make an epic choice between their friendship and their beliefs.

As exciting and readable as a Cold War thriller * The Times *
Reid-Henry brings back the danger and intense emotions of that revolutionary period...it reads like adventure fiction. * Independent *
Gripping...deeply impressive...rigorously sourced * Independent on Sunday *
Two big figures, one fine debut: It is quite a task to make your first book a lucid, pulsating study of not one but two huge figures, but Simon Reid-Henry pulls it off . . . Reid-Henry produces a taut history of two men who brought out the best in each other and came to embody the very notion of modern-day protest. * The Economist's Intelligent Life *
Absorbing * Sunday Times *
Lucid, well-researched and highly readable * City AM *

Simon Reid-Henry is a writer and prize-winning scholar of the Cuban revolution. He lives with his partner in London where he lectures in geography at Queen Mary, University of London. This is his first book.

GOR001816190
Fidel and Che: The Revolutionary Friendship Between Fidel Castro and Che Guevara by Simon Reid-Henry
Simon Reid-Henry
Used - Very Good
Paperback
Hodder & Stoughton General Division
2009-07-09
480
0340923466
9780340923467
N/A
Book picture is for illustrative purposes only, actual binding, cover or edition may vary.
This is a used book - there is no escaping the fact it has been read by someone else and it will show signs of wear and previous use. Overall we expect it to be in very good condition, but if you are not entirely satisfied please get in touch with us.