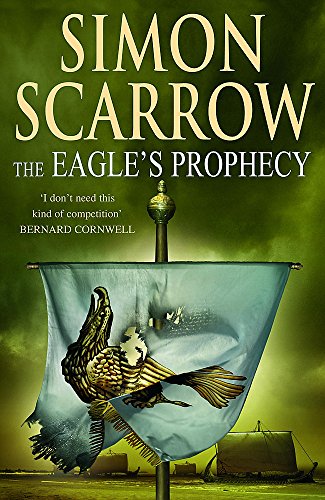 The Eagle's Prophecy (Eagles of the Empire 6)
by Simon Scarrow

The Eagle's Prophecy (Eagles of the Empire 6) Summary

The Eagle's Prophecy (Eagles of the Empire 6) by Simon Scarrow

It is spring 45 AD and Centurions Macro and Cato, dismissed from the Second Legion in Britain, are trapped in Rome, waiting for their involvement in the death of a fellow officer to be investigated. It is then that the imperial secretary, the devious Narcissus, makes them an offer they can't refuse; to rescue an imperial agent who has been captured by pirates operating from the Illyrian coast. With him were scrolls vital to the safety of the Emperor and the future of Rome. However, Narcissus also sends Vitellius, an old enemy of the two centurions. The three officers set out from Ravenna with the imperial fleet but the pirates are forewarned and the Romans pay a heavy price. Outnumbered by the enemy, surrounded by rumours of treachery and endangered by Vitellius' desire to redeem himself, Centurions Macro and Cato must find the pirate base to avert a disaster that could destroy the Emperor.

Customer Reviews - The Eagle's Prophecy (Eagles of the Empire 6)

The Eagle's Prophecy (Eagles of the Empire 6) Reviews

Praise for Simon Scarrow's novels: 'I really don't need this kind of competition... It's a great read' -- Bernard Cornwell
Scarrow's [novels] rank with the best * Independent *
Gripping and moving * The Times *
A satisfyingly bloodthirsty, bawdy romp...perfect for Bernard Cornwell addicts who will relish its historical detail and fast-paced action. Storming stuff * Good Book Guide *
Ferocious and compelling * Daily Express *
A Rome full of HOUSE OF CARDS treachery... Roman soldiering at its very best - even by Scarrow's high standards - in this winning chunk of historical fiction * Sunday Sport *
Rollicking good fun * Mail on Sunday *
A fast-moving and exceptionally well-paced historical thriller * BBC History Magazine *
'It's Spartacus meets Master and Commander in this rip-roaring, thoroughly entertaining tale of swashbuckling adventure from one of the most exciting writers in historical fiction' * Scottish Daily Record *

Simon Scarrow is a Sunday Times No. 1 bestselling author. His many successful books include his Eagles of the Empire novels featuring Roman soldiers Macro and Cato, most recently INVICTUS, BRITANNIA, BROTHERS IN BLOOD and PRAETORIAN, as well as HEARTS OF STONE, set in Greece during the Second World War, SWORD AND SCIMITAR, about the 1565 Siege of Malta, and a quartet about Wellington and Napoleon including the No. 1 Sunday Times bestseller THE FIELDS OF DEATH. He is the author with T. J. Andrews of the novels ARENA and INVADER.

GOR001221606
The Eagle's Prophecy (Eagles of the Empire 6) by Simon Scarrow
Simon Scarrow
Eagle
Used - Very Good
Hardback
Headline Publishing Group
2005-09-12
320
075530117X
9780755301171
N/A
Book picture is for illustrative purposes only, actual binding, cover or edition may vary.
This is a used book - there is no escaping the fact it has been read by someone else and it will show signs of wear and previous use. Overall we expect it to be in very good condition, but if you are not entirely satisfied please get in touch with us.