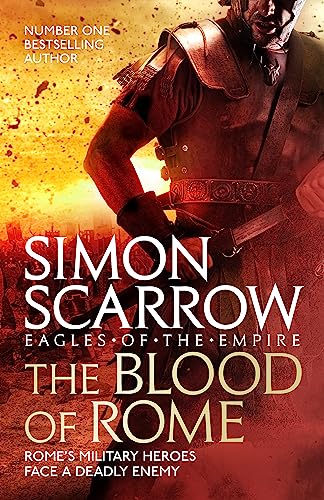 An action-packed novel of military action, courage and camaraderie, taking Prefect Cato and Centurion Macro to the eastern fringes of the Roman Empire. From the bestselling author of DAY OF THE CAESARS.

The Blood of Rome (Eagles of the Empire 17) Summary

Don't miss the next epic novel in the Eagles of the Empire series - TRAITORS OF ROME is out on 14th November 2019, and available for pre-order now!

The gripping and action-packed new adventure in Simon Scarrow's bestselling Eagles of the Empire series, not to be missed by readers of Conn Iggulden and Bernard Cornwell.

It is AD 55. As trouble brews on the eastern fringes of the Roman Empire, Prefect Cato and Centurion Macro prepare for war...

The wily Parthian Empire has invaded Roman-ruled Armenia, ousting King Rhadamistus. The King is ambitious and ruthless, but he is loyal to Rome. General Corbulo must restore him to power, while also readying the troops for war with Parthia. Corbulo welcomes new arrivals Cato and Macro, experienced soldiers who know how to knock into shape an undermanned unit of men ill-equipped for conflict.

But Rhadamistus's brutality towards those who ousted him will spark an uprising which will test the bravery of the Roman army to the limit. While the enemy watches from over the border...

What readers are saying about THE BLOOD OF ROME:

'Yet another masterful story of the legions by Simon Scarrow'

'Simon Scarrow is a master of storytelling and rip-roaring adventures. Totally enthralling'

The Blood of Rome (Eagles of the Empire 17) Reviews

Praise for Simon Scarrow's novels: 'Gripping... ferocious and compelling' * Daily Express *
A new book in Simon Scarrow's long-running series about the Roman army is always a joy * The Times *
Scarrow's [novels] rank with the best * Independent *
I really don't need this kind of competition... It's a great read -- Bernard Cornwell
Blood, gore, political intrigue, gripes, fears - ah, coming back to Scarrow's Eagles of Empire series is like a family homecoming in front of a warm fire... A historical fiction thriller that'll have you reaching for your gladius * Daily Sport *
The Eagles of the Empire series marches on with the brilliantly told adventures of Cato and Macro... Roman soldiering at its very best - even by Scarrow's high standards * Sunday Sport *
A satisfyingly bloodthirsty, bawdy romp...perfect for Bernard Cornwell addicts who will relish its historical detail and fast-paced action. Storming stuff * Good Book Guide *
A rip-roaring read * Mail on Sunday *
An engrossing storyline, full of teeth-clenching battles, political machinations, treachery, honour, love and death... More, please! -- Elizabeth Chadwick

Simon Scarrow is a Sunday Times No. 1 bestselling author. His many successful books include his Eagles of the Empire novels featuring Roman soldiers Macro and Cato, most recently TRAITORS OF ROME, THE BLOOD OF ROME, DAY OF THE CAESARS, INVICTUS and BRITANNIA, as well as HEARTS OF STONE, set in Greece during the Second World War, SWORD AND SCIMITAR, about the 1565 Siege of Malta, and a quartet about Wellington and Napoleon including the No. 1 Sunday Times bestseller THE FIELDS OF DEATH. He is the author with T. J. Andrews of the bestselling novels ARENA, INVADER and PIRATA. Find out more at www.simonscarrow.co.uk and on Facebook /officialsimonscarrow and Twitter @SimonScarrow

GOR009765758
The Blood of Rome (Eagles of the Empire 17) by Simon Scarrow
Simon Scarrow
Used - Very Good
Paperback
Headline Publishing Group
2019-03-21
480
1472258371
9781472258373
N/A
Book picture is for illustrative purposes only, actual binding, cover or edition may vary.
This is a used book - there is no escaping the fact it has been read by someone else and it will show signs of wear and previous use. Overall we expect it to be in very good condition, but if you are not entirely satisfied please get in touch with us.