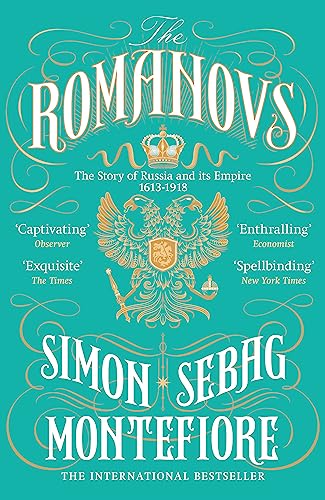 The Romanovs
by Simon Sebag Montefiore

The Romanovs were the most successful dynasty of modern times, ruling a sixth of the world's surface. How did one family turn a war-ruined principality into the world's greatest empire? And how did they lose it all?

This is the intimate story of twenty tsars and tsarinas, some touched by genius, some by madness, but all inspired by holy autocracy and imperial ambition. Montefiore's gripping chronicle reveals their secret world of unlimited power and ruthless empire-building, overshadowed by palace conspiracy, family rivalries, sexual decadence and wild extravagance, and peopled by a cast of adventurers, courtesans, revolutionaries and poets. Written with dazzling literary flair, drawing on new archival research, THE ROMANOVS is at once an enthralling chronicle of triumph and tragedy, love and death, a universal study of power, and an essential portrait of the empire that still defines Russia today.

'Simon Sebag Montefiore's The Romanovs is epic history on the grandest scale . . . A story of conspiracy, drunken coups, assassination, torture, impaling, breaking on the wheel, lethal floggings with the knout, sexual and alcoholic excess, charlatans and pretenders, flamboyant wealth based on a grinding serfdom, and, not surprisingly, a vicious cycle of repression and revolt. Game of Thrones seems like the proverbial vicar's tea party in comparison . . . Reading Montefiore's excellent account, it is hard to imagine how the monarchy could ever have survived under their catastrophic leadership' -- Antony Beevor * FINANCIAL TIMES *
'Captivating . . . The story of the Romanovs has been told countless times but never with such a compelling combination of literary flair, narrative drive, solid research and psychological insight. The Romanovs covers it all, from war and diplomacy to institution building and court intrigue, but it is chiefly an intimate portrait that brings to life the twenty sovereigns of Russia in vivid fashion . . . Montefiore writes with subtlety and sophistication about the nature of court life, the dynamics of power and the shifting configurations of the various players' -- Douglas Smith * LITERARY REVIEW *
'Don't let its size fool you:There's never been a more inviting 700-plus-page historical tome. That's because the author, who matches rigorous scholarship with a novelist's eye for delicious details, is clearly having so much fun. And why not? In three centuries, the Romanovs produced titans and weaklings, war and peace, and enough salacious behavior to make us say, "Turn off thy Kardashians! Pick up thy Montefiore!"' -- Oprah Winfrey * O MAGAZINE *
'Montefiore has an eye for the telling detail which lifts an unfamiliar narrative. His mammoth history of Russia's royal dynasty features many such vivid, amusing and surprising particulars. Indeed it is startlingly lubricious and gory . . . Gore and sex aside, the author's pen produces reams of fluent, sometimes sparkling prose. Many of his reflections on the Romanov era apply well to Vladimir Putin's domains now . . . The Russian court was an entrepot of power: its role as a broker allowed participants to amass wealth and bonded them in shared loyalty. But it also allowed them to compete without resorting to civil war or revolution. That sounds pretty much like the modern Kremlin' * THE ECONOMIST *
'Charts the rise and fall of Russia's Romanov dynasty, which began in 1613 and ended with the whole royal family being shot dead in a basement in 1918. It has been painstakingly researched and the attention to historical detail is breathtaking. The lives of 20 tsars and tsarinas are recorded in exquisite detail through words and pictures. Although some of their escapades are not for the faint-hearted (the Russians were barbaric in their punishments) the rich and vibrant history is utterly compelling. It grabs you by the hand and thrusts you into the world of Imperial Russia with all its decadence and finery. Montefiore has become a popular presenter of BBC history programmes on subjects ranging from Jerusalem to Spain, and here his clear, concise narration and wonderful tone make this a delight to read. Ideal for students of history or for those just seduced by the BBC's version of War and Peace and wanting to brush up on their history' -- Tania Findlay * THE SUN *
'With its sordid power struggles, violence and brutality, its cast of magnificent monsters, tragic victims and grotesque 'holy men', this is an extraordinary and gripping tale . . . By turns horrific, hilarious and moving, but ultimately tragic, this is essential reading for anyone interested in Russia' -- Adam Zamoyski * THE SPECTATOR *
'Wonderfully compelling and insightful . . . Sebag Montefiore provides fabulously revealing pen-portraits of the 20 Romanov tsars, as well as their spouses, mistresses and senior advisers . . . The author has already written excellent books on Catherine the Great and Stalin. This one is even better, combining as it does his expert knowledge of Russian history with the narrative wizardry displayed in his previous bestseller, Jerusalem. The Romanovs is the gripping and scarcely credible tale of the most successful royal dynasty since the Caesars, and Sebag Montefiore tells it brilliantly' -- Saul David * EVENING STANDARD *
'An impressive book that combines rigorous research with exquisite prose' -- Gerard de Groot * THE TIMES *
'Montefiore's journey through 300 years of the Romanov dynasty is a study of brutality, sex and power . . . riveting . . . the research is meticulous and the style captivating' -- John Kampfner * THE OBSERVER *

'This magnificent and magisterial history . . . is a wonderfully ambitious account of 300 years of Russian history . . . an authoritative and gripping account of the Romanovs. This is a superb book and it will surely become the definitive work'

This meticulously researched account of Russian history from the 17th to the 20th century makes
Game Of Thrones seem staid by comparison. Beneath the astonishing wealth of historical detail
runs the constant theme of the impossible challenge, even for a dynasty of autocrats, of ruling the
'ever-expanding, multi-faith, multi-ethnic empire' that was Russia

-- Jane Shilling * DAILY MAIL *
A bravura history of the Russian imperial dynasty that does not blanch at the tales of excess that surround this often savage imperial household * THE SUNDAY TIMES - Summer Reading 2017 *
It is very violent and gruesome. It made me realise that our world is a much better place than I thought -- Kirstie Allsopp
Wonderfully written and fascinating down to the last footnote ...[Montefiore's] style is polished, lively, informed ... Montefiore is an accomplished storyteller, and what might have been a plodding succession of reigns reads instead like a novel ... Like a novel, too, this is a hard book to put down. As historical reconstruction and as storytelling, The Romanovs is an achievement of the first rank -- David Walton * THE DALLAS MORNING NEWS *

Simon Sebag Montefiore is the internationally bestselling author of a number of prize-winning books that have been published in forty-eight languages. CATHERINE THE GREAT & POTEMKIN was shortlisted for the Samuel Johnson Prize; STALIN: THE COURT OF THE RED TSAR won the BBA History Book of the Year Prize; YOUNG STALIN won the Costa Biography Award, the LA Times Book Prize for Biography and the Grand Prix de la Biographie Politique; JERUSALEM: THE BIOGRAPHY won the JBC Book of the Year Prize and the Wenjin Book Prize in China; THE ROMANOVS: 1613-1918 won the Lupicaia del Terriccio Book Prize. He is the author of the Moscow Trilogy of novels: SASHENKA, RED SKY AT NOON and ONE NIGHT IN WINTER, which won the Political Fiction Book of the Year Award. He is also the author of WRITTEN IN HISTORY: LETTERS THAT CHANGED THE WORLD and the forthcoming VOICES OF HISTORY: SPEECHES THAT CHANGED THE WORLD.

GOR008310842
The Romanovs: 1613-1918 by Simon Sebag Montefiore
Simon Sebag Montefiore
Used - Like New
Paperback
Orion Publishing Co
2017-01-01
736
1474600875
9781474600873
N/A
Book picture is for illustrative purposes only, actual binding, cover or edition may vary.
This is a used book - there is no escaping the fact it has been read by someone else and it will show signs of wear and previous use. Overall we expect it to be in very good condition, but if you are not entirely satisfied please get in touch with us.