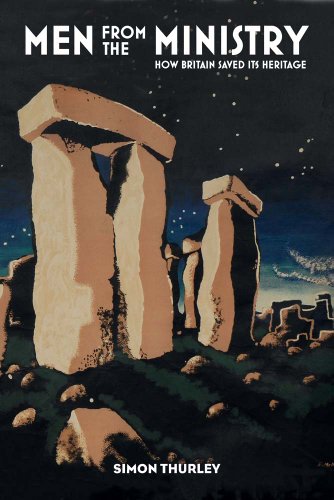 Men from the Ministry
by Simon Thurley

In Stock
$28.49
inc. GST
Between 1900 and 1950 the British state amassed a huge collection of over 800 historic buildings, monuments and historic sites and opened them to the public. Nothing like it had ever been seen before. This book explains why the extraordinary collecting frenzy took place.
Very Good
6 in stock

Men from the Ministry Summary

Men from the Ministry: How Britain Saved Its Heritage by Simon Thurley

Between 1900 and 1950 the British state amassed a huge collection of over 800 historic buildings, monuments, and sites and opened them to the public. This engaging book explains why the extraordinary collecting frenzy took place, locating it in the fragile and nostalgic atmosphere of the interwar years, dominated by neo-romanticism and cultural protectionism. The government's activities were mirrored by the establishment of dozens of voluntary bodies, including the Council for the Protection of Rural England, the Society for the Protection of Ancient Buildings, and the National Trust. Men from the Ministry sets all this activity, for the first time, in its political, economic and cultural contexts, painting a picture of a country traumatized by war, fearful of losing what was left of its history, and a government that actively set out to protect them. It dissects a government program that established a modern state on deep historical and rural roots.

Men from the Ministry Reviews

-- Rosemary Hill * Sunday Telegraph *
"The historic built environment demands parity of esteem, Simon argues, and he ends the book by putting the case for tax relief in return for public access to help the owners of historic property to meet their maintenance costs. The two are intimately linked: many recent sales of works of art have been the result of the owners of great houses selling in order to undertake much-needed building repairs." Salon. * Salon *

"In this absorbing book, the chief executive of English Heritage explores how, between 1900 and 1950, the British state amassed more than 800 buildings, monuments and historic sites and gave the public access to them. Thurley is a well-placed guide to the characters who enabled this collecting spree and to the challenges that they faced; he tells a vivid story of how the country successfully established a vast open-air museum" - Apollo Magazine, 1st July 2013

* Apollo Magazine *
"Everyone involved with looking after historic buildings today. . .should read Simon Thurley's. . .well-researched and readable book [...]. Dr Thurley, as the chief executive of English Heritage since 2003 - and a former Director of the Museum of London and Curator of Historic Royal Palaces - is in an exceptional position to tell this tale, which he does at a cracking pace."-Jeremy Musson, Historic House -- Jeremy Musson * Historic House *
". . .[This] is a timely book documenting the long and passionate struggle for preserving historic buildings and sites."-R. C. Richardson, THES -- R. C. Richardson * THES *
`Thurley's text [is] knowledgeable, subtle, supple, by turns celebratory and sardonic.'-David Lowenthal, TLS -- David Lowenthal, * TLS *

Simon Thurley is the Chief Executive of English Heritage. He was formerly the Director of the Museum of London, and the Curator of Historic Royal Palaces.

GOR006244789
Men from the Ministry: How Britain Saved Its Heritage by Simon Thurley
Simon Thurley
Used - Very Good
Hardback
Yale University Press
2013-05-14
224
0300195729
9780300195729
N/A
Book picture is for illustrative purposes only, actual binding, cover or edition may vary.
This is a used book - there is no escaping the fact it has been read by someone else and it will show signs of wear and previous use. Overall we expect it to be in very good condition, but if you are not entirely satisfied please get in touch with us.