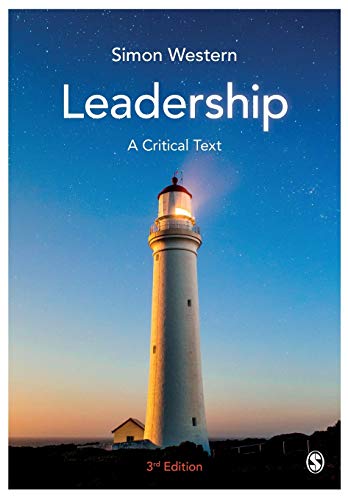 A much loved, highly regarded Leadership text which provides a refreshing counterpoint to traditional textbooks. It is not a typical textbook but rather presents a new framework for understanding leadership.

In this original text, Simon Western deconstructs and reconstructs leadership to challenge the popular notion of the individual or hero leader, instead using his own framework to present leadership as a distributed process.

New to the third edition:

Everyone has opinions about leadership, but few people have thought about it as deeply as Simon Western. In this important text, he shows us why we should be suspicious of easy answers and noisy leaders. This is a beautifully written and thought provoking book for anyone who wants to move beyond glib recipes and really think hard about our collective futures.

This is the third edition of an already internationally acclaimed text. In comparison to previous editions, this third iteration offers shorter chapters and a more transparently presented argumentation.

The tag attached to 'Leadership' in the book's title - 'A Critical Text' - is fully justified, given that the premises of argument proposed, challenged and justified through this book remain strongly influenced by reference to European enlightenment (dialectics) and to discourses honed by members of the so-called Frankfurt School and which shaped current interpretations and applications of Critical Theory.


-- Keith Jackson * Asia Pacific Business Review *
Destined to become a classic, this book is one of the most comprehensive and insightful critical perspectives on leadership that has emerged in the past two decades. Now in its third edition, Leadership: A Critical Text is richly theorized, historically and ecologically grounded, and immensely practical. It is quite simply one of the very best single-volume works on leadership available.