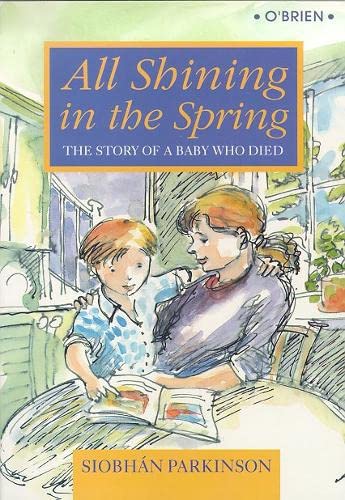 All Shining in the Spring
by Siobhan Parkinson

Out of Stock
$15.99
+10% GST
Matthew is looking forward to his new little brother or sister. Then there is sad news. The doctor tells Matthew's parents that the baby is not growing properly inside its mother and will not be able to live after it is born.
Well Read
Only 0 left

All Shining in the Spring Summary

All Shining in the Spring by Siobhan Parkinson

Matthew is looking forward to the new baby. He is planning how he will help with looking after his little brother or sister and the games they will play when the baby is older.

Then there is sad news. The doctor tells Matthew's parents that the baby is not growing properly inside its mother and will not be able to live after it is born.

Written by the author to help her own son cope with the death of their new baby at birth, All Shining in the Spring is a child-centred, simply-written book. It is intended to give a child a clear and sympathetic understanding of the death of a baby, be it a family member or not, and to deal with the feelings and questions which such a death raises.

The book can be read to or by a child and would be ideal in a family situation, in schools, for carers, social workers and maternity hospitals.

Having grown up in Galway and Donegal, Siobhan Parkinson has lived most of her adult life in her native Dublin. She studied English literature and German at Trinity, and went on to take her doctorate in English literature. She has worked for many years as an editor, a profession that very closely resembles that of writing. She concentrates more on her writing these days, but is also a very active member of the writers-in-schools scheme, and she gives workshops in creative writing and talks on her work in all sorts of situations. She has held various writing residencies and has been editor of, Inis -- The Children's Books Ireland Magazine, and Bookbird, the IbBy International magazine. Her books have won numerous awards and been translated into lots of languages, her favourites being Latvian, because it is so different, and Japanese, because it is back to front. Her husband, Roger Bennett, is a woodturner and teacher, and her son Matthew is almost grown up. Being her son didn't do him too much harm, he claims, but time will tell. Her book Sisters ... no way! won the Bisto Book of the Year award. Four Kids, Three Cats, Two Cows, One Witch (maybe) won a Bisto Merit Award. Siobhan's next book, The Moon King, also won a Bisto Merit Award and was on the iBbY Honour List 2000, in Ireland's first year as a member of iBbY. Siobhan was Ireland's first Laureate na nOg (Children's Laureate) from 2010-2012.

GOR010090824
All Shining in the Spring by Siobhan Parkinson
Siobhan Parkinson
Used - Well Read
Paperback
O'Brien Press Ltd
1995-03-01
64
0862783879
9780862783877
Commended for Irish Best Designed Book Award - Highly Commended (1996) 1996 (Ireland)
Book picture is for illustrative purposes only, actual binding, cover or edition may vary.
This is a used book - there is no escaping the fact it has been read by someone else and it will show signs of wear and previous use. Overall we expect it to be in very good condition, but if you are not entirely satisfied please get in touch with us.