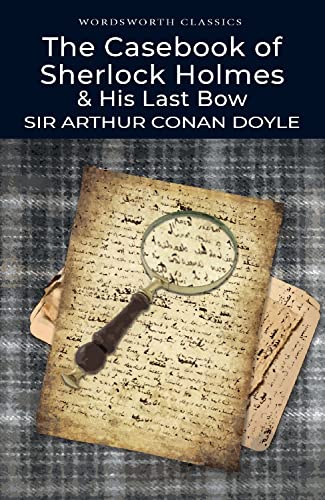 These two fascinating sets of stories, The Casebook of Sherlock Holmes and His Last Bow, make a glorious farewell to the greatest detective of them all and his erstwhile companion, Dr Watson.

With a new Introduction by David Stuart Davies.

'Surely no man would take up my profession if it were not that danger attracts him.'

In The Casebook, you can read the final twelve stories that Sir Arthur Conan Doyle wrote about his brilliant detective. They are perhaps the most unusual and the darkest that he penned. Treachery, mutilation and the terrible consequences of infidelity are just some of the themes explored in these stories, along with atmospheric touches of the gothic, involving a bloodsucking vampire, crypts at midnight and strange bones in a furnace.

The collection His Last Bow features some of Sherlock Holmes' most dramatic cases, including the vicious revenge intrigue connected with 'The Red Circle' and the insidious murders in 'The Devil's Foot'. The title story recounts how Sherlock Holmes is brought out of retirement to help the government foil a German plot on the eve of the First World War.

These two fascinating sets of stories make a glorious farewell to the greatest detective of them all and his erstwhile companion, Dr Watson.

GOR000274857
The Casebook of Sherlock Holmes & His Last Bow by Sir Arthur Conan Doyle
Sir Arthur Conan Doyle
Wordsworth Classics
Used - Very Good
Paperback
Wordsworth Editions Ltd
1995-11-05
432
1853260703
9781853260704
N/A
Book picture is for illustrative purposes only, actual binding, cover or edition may vary.
This is a used book - there is no escaping the fact it has been read by someone else and it will show signs of wear and previous use. Overall we expect it to be in very good condition, but if you are not entirely satisfied please get in touch with us
Trustpilot