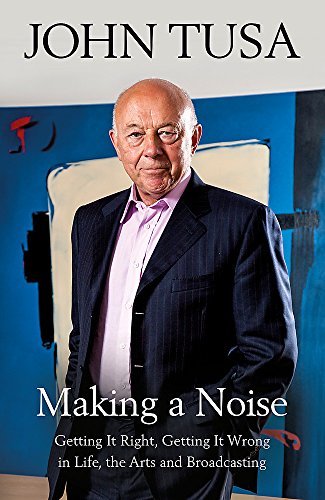 Making a Noise
by John Tusa

Used Price
$23.49
inc. GST
Free Shipping in Australia
The memoir of Sir John Tusa, spanning his childhood and distinguished career in the arts and cultural leadership.
Like New Very Good

Making a Noise: Getting It Right, Getting It Wrong in Life, Arts and Broadcasting by John Tusa

In almost sixty years of professional life, John Tusa has fought for and sometimes against the major arts and political institutions in the country. A distinguished journalist, broadcaster and leader of arts organisations, he has stood up publicly for the independence of the BBC, the need for public funding of the arts and for the integrity of universities. He has made enemies in the process.

From the battles to create the ground-breaking Newsnight in 1979, to six years of defending the BBC World Service from political interference, Tusa's account is etched with candour. His account of two years of internecine warfare at the top of the BBC under the Chairman, 'Dukey' Hussey will go down as a major contribution to BBC history. His recollections of a hilarious and petty-minded few months as head of a Cambridge college will be read as a case study of the absurdities of academic life; while running the rejected and maligned Barbican Centre, Tusa led its recovery into the major cultural centre that it is today.

Often based on personal diaries, Making a Noise is a fearless and entertaining memoir of life at the top of the arts and broadcasting.

Born in Czechoslovakia in 1936, John Tusa came to England in 1939. He was educated at Gresham's School, Holt, before serving as Second Lieutenant Royal Artillery in West Germany during National Service from 1954-56. Reading history at Trinity College, Cambridge from 1956-59, he took a first class honours degree. After two decades as a freelance, he became main presenter with Peter Snow of BBC 2's Newsnight from its foundation in 1980. From 1986-92 he was Managing Director of BBC World Service. He spent a few months as President of Wolfson College, Cambridge in 1993. From 1995-2007 he was Managing Director of the Barbican Centre. Between 2007 and 2014 he was Executive Chair of the Clore Leadership Programme and Chair of the Governors of University of the Arts London. Now he is joint Chair of the European Union Youth Orchestra. He has sat on the Boards of several arts institutions. He was awarded a knighthood in 2003.

GOR009309742
Making a Noise: Getting It Right, Getting It Wrong in Life, Arts and Broadcasting by John Tusa
John Tusa
Used - Like New
Hardback
Orion Publishing Co
2018-02-22
400
147460708X
9781474607087
N/A
Book picture is for illustrative purposes only, actual binding, cover or edition may vary.
The book has been read, but looks new. The book cover has no visible wear, and the dust jacket is included if applicable. No missing or damaged pages, no tears, possible very minimal creasing, no underlining or highlighting of text, and no writing in the margins.