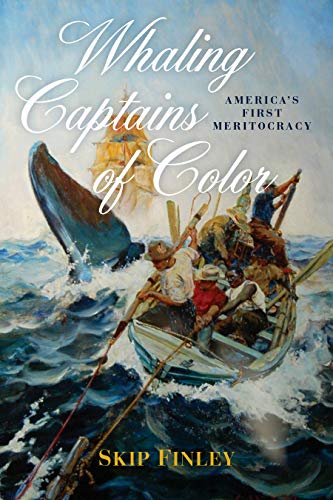 Whaling was the first American industry to exhibit any diversity. Working with archival records at museums, in libraries, archives and interviews with people whose ancestors were whaling masters, Finley culls stories from the lives of 54 black whaling captains to create a portrait of what life was like for these leaders of colour on the high seas.

Many historic houses decorating Skip Finley's native Martha's Vineyard were originally built by whaling captains. Whether in his village of Oak Bluffs, on the Island of Nantucket where whaling burgeoned, or New Bedford, which became the City of Light thanks to whaling, these magnificent homes testify to the money that was made from whaling. The triangle connecting Martha's Vineyard to these areas and Eastern Long Island was the Middle East of its day. Whale wealth was astronomical, and endures in the form of land trusts, roads, hotels, docks, businesses, homes, churches and parks. Whaling revenues were invested into railroads and the textile industry. Millions of whales died in the 250 year enterprise, with more than 2,700 ships built for chasing, killing and processing whales. That story is well-told in books, some that have been bestsellers. What hasn't been told is the story of whaling's colorful leaders in an era when the only other option was slavery. Whaling was the first American industry to exhibit any diversity. A man got to be captain not because he was white or well connected, but because he knew how to kill a whale. Along the way he could learn navigation and reading and writing. Whaling presented a tantalizing alternative to mainland life. Working with archival records at whaling museums, in libraries, from private archives and interviews with people whose ancestors were whaling masters, Finley culls stories from the lives of 54 black whaling captains to create a portrait of what life was like for these leaders of color on the high seas. Each time a ship spotted a whale, a group often including the captain would jump into a small boat, row to the whale, and attack it, at times with the captain delivering the killing blow. The first, second or third mate, and boat steerer could eventually have opportunities to move into increasingly responsible roles. Finley explains how this skills-based system propelled captains of color to the helm.

Readers will meet an improbable, diverse, engaging cast of characters: slaves and slavers, abolitionists, Quakers, British, killers and cannibals, deserters and gamblers, gold miners, inventors and investors, cooks and crooks, and of course the whales, the latter of whom seemingly had personalities of their own. The book concludes as facts and factions conspire to kill the industry, including wars, weather, bad management, poor judgment, disease, obsolescence and a non-renewable natural resource. Ironically, the end of the Civil War allowed the African Americans who were captains to exit the difficult and dangerous occupation and make room for the Cape Verdean who picked up the mantle, literally to the end of the industry.
Whaling Captains of Color: America's First Meritocracy is an examination of a fascinating quirk in America's history of race relations.... It follows its cast of characters to their lives after the whaling industry had ended, continuing to illuminate an important chapter in American history."---Vineyard Gazette

"Whaling Captains of Color by Skip Finley is a fascinating exploration of the lives of multicultural whalemen, mostly unknown to us until now, during the eighteenth and nineteenth century in America....Skip Finley thoughtfully honors and illustrates how the men of color in this book shaped commercial whaling, one of America's earliest global industries. I highly recommend this book."-Alicia Carney, Nantucket Book Festival-"Finley follows the history of more than fifty black and native Americans who became whale ship captains, ship owners, and chandlers (running businesses supplying whaling ships). Revealed is a fascinating tale of the rise and fall of family whaling and shipping dominions run by men of color. This is placed against the backdrop of both American society and whaling during the period. Whaling Captains of Color examines both an industry critical to America's industrialization, the people that worked in it, and the dynamics that created a color-blind meritocracy in a color-conscious era."-Ricochet

"In Whaling Captains of Color, Island writer Skip Finley has produced an extraordinary work that will change your perspective on the highly romanticized whaling era in American history, and the role of people of color in a trade that brought whalers fortunes and death."-Martha's Vineyard Times-"Not so long ago, many people of color in the United States did not have many options for employment. When they did find it, they faced an uphill battle in advancing up the ladder. However, in the book, Whaling Captains of Color: America's First Meritocracy, Skip Finley reveals that the whaling industry was one place where a man of color could move up through the ranks and become Master (captain) of a ship. Finley shows how Native Americans, American Blacks, and Cape Verdeans worked on this whaling vessels and became masters of them. Not only does he relate their individual stories but he mixes it with what the whaling industry was and life aboard a whaling vessel. These men did face racism, but on a whaling vessel where life was hard and death always near, whether or not a man could do his job well overcame whatever racism the crew may have felt. This book does a good job of relating the accomplishments of these men of color and their role in making whaling a successful endeavor. I recommend this book for anyone interested in whaling or the achievements of people of color."-Ghost Reader

"This book is the result of extensive research into the whaling trade and the lives of some of its captains.... In writing this book, the author knew he needed to tell the story of whaling to any potential readers who might otherwise be unfamiliar with the industry. He does an admirable job and provides wonderful portraits of the many brave men who reached the pinnacle of their careers because of their knowledge and skills. Although planned as an excellent sea story, by being published during the Black Lives Matter movement, Whaling Captains of Color will be read by many people enthralled to discover that so many black men were in command of their ships and their destinies.-Pirates and Privateers

"Much more than a prodigious work of scholarship, Whaling Captains of Color is also an entertaining read that puts the focus where it properly belongs: on the multicultural essence of a fishery that spanned the globe. Highly recommended."-Nathaniel Philbrick, author of In the Heart of the Sea: The Tragedy of the Whaleship Essex

"Skip Finley provides a fascinating portrait of the turbulent and fraught world of the men of color who not only were whalemen, but also became leaders in one of America's most iconic industries. Whaling Captains of Color is a most welcome and long overdue addition to the literature, and one which will hopefully spur others to dig deeper into this important aspect of whaling history."-Eric Jay Dolin, author of Leviathan: The History of Whaling in America

"In this engaging new volume, Skip Finley has written a comprehensive account of the over fifty sailors of color who rose to captain America's great whaling ships. Meticulously researched, Whaling Captains of Color provides an overview of the 200 years of industrial whaling, a profession in which a relative meritocracy existed. In addition, Finley provides a critically important analysis of the social and legal conditions on land which encouraged so many people of color to brave the dangers of the sea."-Henry Louis Gates, Jr., Alphonse Fletcher University Professor, Harvard University

"The story of people of color in the whaling industry is a fascinating and hitherto unexplored subject enough, but Skip Finley's brilliant survey of the black captains and crew of the New England whale fisheries takes it one step further. His swift and sure narrative is excitingly told, bringing a fresh and vibrant focus to a vital part of American, and indeed global, history."-Philip Hoare, author of The Whale
Skip Finley is a former broadcasting executive who was responsible for over 40 U.S. radio stations and experienced success in all areas of radio. Attempting retirement since age 50, he keeps returning to communications, currently in marketing at the Vineyard Gazette Media Group on Martha's Vineyard, where he summered since 1955, deciding to become a writer. For five years Finley wrote the weekly Oak Bluffs Town Column and is a contributor to several publications in the areas of whaling and history.
NGR9781682475096
9781682475096
1682475093
Whaling Captains of Color: America's First Meritocracy by Skip Finley
Skip Finley
New
Hardback
Naval Institute Press
2020-09-30
304
N/A
Book picture is for illustrative purposes only, actual binding, cover or edition may vary.
This is a new book - be the first to read this copy. With untouched pages and a perfect binding, your brand new copy is ready to be opened for the first time
Trustpilot