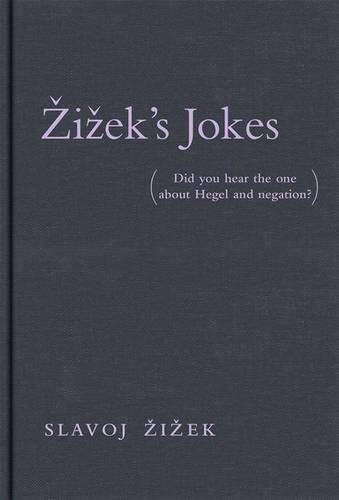 Zizek's Jokes: (Did you hear the one about Hegel and negation?) by Slavoj Zizek (Professor, European Graduate School)

Zizek as comedian: jokes in the service of philosophy.

"A serious and good philosophical work could be written consisting entirely of jokes."-Ludwig Wittgenstein

The good news is that this book offers an entertaining but enlightening compilation of Zizekisms. Unlike any other book by Slavoj Zizek, this compact arrangement of jokes culled from his writings provides an index to certain philosophical, political, and sexual themes that preoccupy him. Zizek's Jokes contains the set-ups and punch lines-as well as the offenses and insults-that Zizek is famous for, all in less than 200 pages.

So what's the bad news? There is no bad news. There's just the inimitable Slavoj Zizek, disguised as an impossibly erudite, politically incorrect uncle, beginning a sentence, "There is an old Jewish joke, loved by Derrida..." For Zizek, jokes are amusing stories that offer a shortcut to philosophical insight. He illustrates the logic of the Hegelian triad, for example, with three variations of the "Not tonight, dear, I have a headache" classic: first the wife claims a migraine; then the husband does; then the wife exclaims, "Darling, I have a terrible migraine, so let's have some sex to refresh me!" A punch line about a beer bottle provides a Lacanian lesson about one signifier. And a "truly obscene" version of the famous "aristocrats" joke has the family offering a short course in Hegelian thought rather than a display of unspeakables.

Zizek's Jokes contains every joke cited, paraphrased, or narrated in Zizek's work in English (including some in unpublished manuscripts), including different versions of the same joke that make different points in different contexts. The larger point being that comedy is central to Zizek's seriousness.

Slavoj Zizek, a philosopher and cultural critic, is Senior Researcher in the Department of Philosophy at the University of Ljubljana, Global Distinguished Professor of German at New York University, and International Director of the Birkbeck Institute for the Humanities at the University of London. He is the author of more than thirty books, including Looking Awry: An Introduction to Jacques Lacan through Popular Culture, The Puppet and the Dwarf: The Perverse Core of Christianity, The Parallax View, The Monstrosity of Christ: Paradox or Dialectic (with John Milbank), and Zizek's Jokes (Did you hear the one about Hegel and negation?), these five published by the MIT Press.

GOR006746200
Zizek's Jokes: (Did you hear the one about Hegel and negation?) by Slavoj Zizek (Professor, European Graduate School)
Slavoj Zizek (Professor, European Graduate School)
The MIT Press
Used - Very Good
Hardback
MIT Press Ltd
2014-02-21
168
0262026716
9780262026710
N/A
Book picture is for illustrative purposes only, actual binding, cover or edition may vary.
This is a used book - there is no escaping the fact it has been read by someone else and it will show signs of wear and previous use. Overall we expect it to be in very good condition, but if you are not entirely satisfied please get in touch with us.