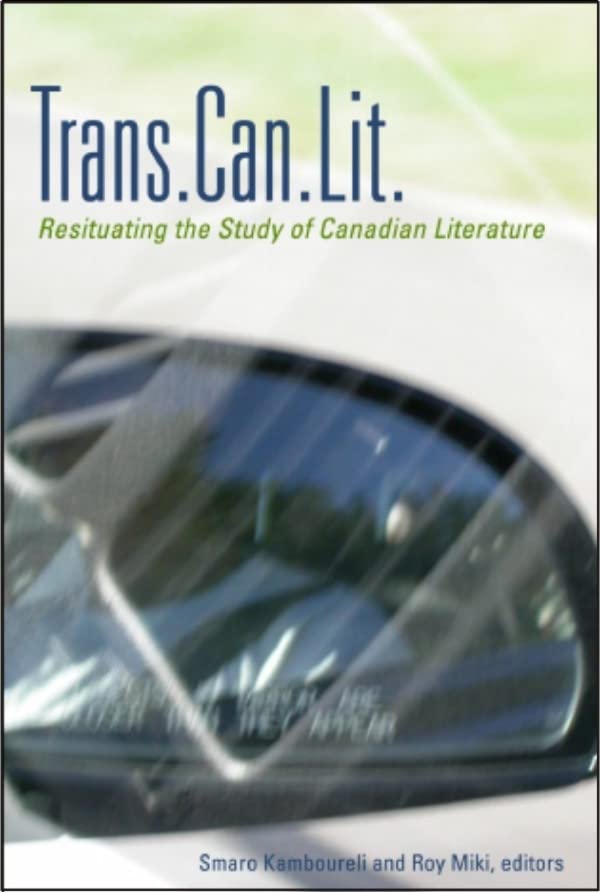 In Stock
$16.99
+10% GST
The study of Canadian literature - CanLit - has undergone dramatic changes since it became an area of specialisation in the 1960s and '70s. This book addresses cultural policy, citizenship, white civility, and the celebrated status of diasporic writers.
Very Good
Only 1 left

Trans.Can.Lit: Resituating the Study of Canadian Literature by Smaro Kamboureli

The study of Canadian literatureaCanLitahas undergone dramatic changes since it became an area of specialization in the 1960s and '70s. As new global forces in the 1990s undermined its nation-based critical assumptions, its theoretical focus and research methods lost their immediacy. The contributors to Trans.Can.Lit address cultural policy, citizenship, white civility, and the celebrated status of diasporic writers, unabashedly recognizing the imperative to transfigure the disciplinary and institutional frameworks within which Canadian literature is produced, disseminated, studied, taught, and imagined.

``The outcome of a great idea that manages well to be accessible and relevant to both scholars and general readers of Canadian literature.'' -- Research Book News, May 2008, 200806
``While Trans.Can.Lit does not engage overtly with how postcolonial studies and its dissenters and offshoots--including Indigenous, diasporic, and critical race studies--inform the study of CanLit, a quick look at the contents pages reveals an impressive list of some of the foremost Canadian critics working in these fields.... One of the strengths of organizing this collection around the intersecton of literature, institutions, and citizenship is that the essays become a multivoiced call for revolution to critics and teachers working in a field under attack... Trans.Can.Lit reminded me, as an academic who teaches and researches CanLit in Australia, not only of the specificities of debates occurring within Canada but also of how many of the concerns in Canada transfer with frightening ease to an Australian context. The `trans' in CanLit moves beyond the porous borders of Canada, reminding academics working in literary studies about the power of what we do and of the responsibility attached to this power.'' -- Debra Dudek -- Canadian Literature, No. 199, Winter 2008, 200810
``The articles...make this a formidable and important collection, one that will give the serious reader, one interested not only in Canadian literature, but also in contemporary thinking about the intersections among the nation state, difference, globalization and cultural representation, more than enough to ponder.'' -- Tamara Palmer Seiler, University of Calgary -- Canadian Ethnic Studies, Vol. 39, #3, 2007, 200905
``The essays that make up this volume were initially presented at the inaugural Transcanada conference (2005), which asked participants to rethink `the disciplinary and institutional framework within which Canadian literature is produced, disseminated, studied and taught.' In this, they have succeeded admirably.... The preface, written by editors Smaro Kamboureli and Roy Miki, does an excellent job of mapping the issues, ideas, and critical methodologies that are re-shaping the study of Canadian literature.... [T]his rigorous and far-reaching collection is necessary reading for those working within the discipline today.'' -- Carrie Dawson, Dalhousie University -- Dalhousie Review, Vol. 88, No. 1, Spring 2008, 200806

Smaro Kamboureli is a professor and the Avie Bennett Chair in Canadian Literature in the English Department at the University of Toronto. She is the founder of the TransCanada series of books, published by WLU Press, originating from interdisciplinary conferences that initiated collaborative research on the methodologies and institutional structures and contexts that inform and shape the production, dissemination, teaching, and study of Canadian literature. Her most recent publications include Shifting the Ground of Canadian Literary Studies (WLU Press 2012), co-edited with Robert Zacharias and Producing Canadian Literature: Authors Speak on the Literary Marketplace (WLU Press, 2013), co-edited with Kit Dobson. Roy Miki teaches contemporary literature at Simon Fraser University. He has published widely on Asian- Canadian literature as well as writers such as bpNichol, George Bowering, and Roy Kiyooka. He is the author of Broken Entries: Race, Subjectivity, Writing and received the Governor Generalas Award for his poetry book Surrender.

GOR009679985
Trans.Can.Lit: Resituating the Study of Canadian Literature by Smaro Kamboureli
Smaro Kamboureli
Used - Very Good
Paperback
Wilfrid Laurier University Press
2007-03-01
252
0889205132
9780889205130
N/A
Book picture is for illustrative purposes only, actual binding, cover or edition may vary.
This is a used book - there is no escaping the fact it has been read by someone else and it will show signs of wear and previous use. Overall we expect it to be in very good condition, but if you are not entirely satisfied please get in touch with us.