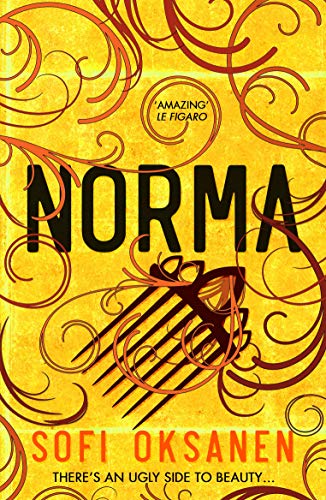 When Anita Naakka jumps in front of an oncoming train, her daughter, Norma, is left alone with the secret they have spent their lives hiding: Norma has supernatural hair, sensitive to the slightest changes in her mood--and the moods of those around her--moving of its own accord, corkscrewing when danger is near. And so it is her hair that alerts her, while she talks with a strange man at her mother's funeral, that her mother may not have taken her own life. Setting out to reconstruct Anita's final months--sifting through puzzling cell phone records, bank statements, video files--Norma begins to realise that her mother knew more about her hair's powers than she let on: a sinister truth beyond Norma's imagining.

Amazing * Le Figaro *
A Toni Morrison from the far North. * Le Monde *
Sofi Oksanen is one of the brightest shining stars in Nordic literature. I want to devour Norma whole. * Norrkoepings Tidningar (Sweden) *
Addictive, lucid, breathtakingly suspenseful, and on top of this it is stunningly observant, eerily well-researched, critical, with feminist overtones and very, very relatable * Affarsmagasinet Forum (Finland) *
A phenomenon * The Times on PURGE *
Powerful, passionately wrought, emotionally shattering, extraordinary * Independent on PURGE *
Purge stands out. Murder, sexual violence and political history combine to place Oksanen in the front rank of crime novelists. * Sunday Times on PURGE *
Finland's hottest crime writer will soon be as well-known as Stieg Larsson * The Times on PURGE *
Essential reading: Purge is not a book to read last thing at night. * Economist on PURGE *

Sofi Oksanen is a Finnish-Estonian novelist and playwright. Purge was her first novel to appear in English. She has received numerous prizes for her work, including the Swedish Academy Nordic Prize, the Prix Femina, the Budapest Grand Prize, the European Book Prize, and the Nordic Council Literature Prize. She lives in Helsinki.

Owen F. Witesman is a professional literary translator with a master's in Finnish and Estonian area studies and a PhD in public affairs from Indiana University.He currently lives in Springville, Utah.

GOR009272841
Norma by Sofi Oksanen
Sofi Oksanen
Used - Very Good
Paperback
Atlantic Books
2018-04-05
320
178239978X
9781782399780
Winner of Ordre des Arts et des Lettres, Medal of Honour 2018 (UK)
Book picture is for illustrative purposes only, actual binding, cover or edition may vary.
This is a used book - there is no escaping the fact it has been read by someone else and it will show signs of wear and previous use. Overall we expect it to be in very good condition, but if you are not entirely satisfied please get in touch with us.