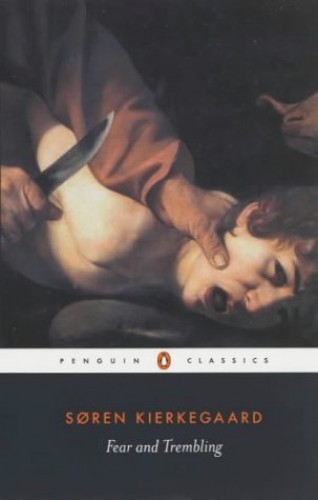 Fear and Trembling
by Soren Kierkegaard

In Stock
$14.99
+10% GST
Presents Abraham as a great man, who chose to sacrifice his son, Isaac, in the face of conflicting expectations and in defiance of any conceivable ethical standard.
Very Good Good Well Read
Only 1 left

In Fear and Trembling, Soren Kierkegaard's infamous and controversial work made a lasting impression on both modern Protestant theology and existentialist philosophers such as Sartre and Camus. This Penguin Classics edition is translated from the Danish with an introduction by Alistair Hannay.

Writing under the pseudonym of 'Johannes de silentio', Kierkegaard expounds his personal view of religion through a discussion of the scene in Genesis in which Abraham prepares to sacrifice his son Isaac at God's command. Believing Abraham's unreserved obedience to be the essential leap of faith needed to make a full commitment to his religion, Kierkegaard himself made great sacrifices in order to dedicate his life entirely to his philosophy and to God. The conviction shown in this religious polemic - that a man can have an exceptional mission in life - informed all Kierkegaard's later writings. His 'teleological suspension of the ethical' challenged the contemporary views of Hegel's universal moral system, and was also hugely influential for both protestant theology and the existentialist movement.

Alastair Hannay's introduction evaluates Kierkegaard's philosophy and the ways in which it conflicted with more accepted contemporary views. This edition also includes detailed notes to complement this groundbreaking analysis of religion, and a new chronology.

Danish-born Scren Kierkegaard (1813-55) wrote on a wide variety of themes, including religion, psychology, and literature. He is remembered for his philosophy, which pioneered the idea of the Absurd, and was influential and in the development of 20th century existentialism. His other works include The Sickness unto Death, Either/Or, and Papers and Journals, all of which are available in Penguin Classics.

If you enjoyed Fear and Trembling, you might like Kierkegaard's The Sickness unto Death, also available in Penguin Classics.

Danish-born Scren Kierkegaard (1813-55) wrote on a wide variety of themes, including religion, psychology, and literature. He is remembered for his philosophy, which was influential in the development of 20th century existentialism.
Alastair Hannay is Professor of Philosophy at the University of Oslo. He is co-editor of the Cambridge Companion to Kierkegaard and has translated Kierkegaard's Fear and Trembling, The Sickness unto Death, Either/Or, and Papers and Journals for Penguin Classics

GOR001414478
Fear and Trembling: Dialectical Lyric by Johannes De Silentio by Soren Kierkegaard
Soren Kierkegaard
Used - Good
Paperback
Penguin Books Ltd
1985-08-29
176
0140444491
9780140444490
N/A
Book picture is for illustrative purposes only, actual binding, cover or edition may vary.
The book has been read but remains in clean condition. All pages are intact and the cover is intact. Some minor wear to the spine.