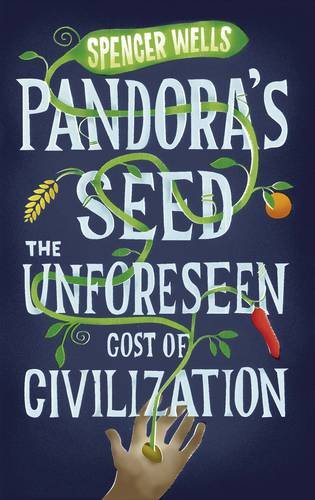 In Stock
$13.99
+10% GST
Examines our cultural inheritance in order to find the turning point that led us to the path we are on, one the author believes we must veer from in order to survive. This title takes us on a globe-trotting tour of human history, back to a seminal event roughly 10,000 years ago, when our species made a radical shift in its way of life.
Very Good
Only 4 left

Pandora's Seed: The Unforeseen Cost of Civilization by Spencer Wells

In The Journey of Man, renowned geneticist and anthropologist Spencer Wells traced human evolution back to our earliest ancestors, creating a remarkable and readable map of our distant past. Now, in his thrilling and thoughtful new book, he examines our cultural inheritance in order to find the turning point that led us to the path we are on today, one he believes we must veer from in order to survive. Pandora's Seed takes us on a powerful and provocative globe-trotting tour of human history, back to a seminal event roughly 10,000 years ago, when our species made a radical shift in its way of life: we became farmers rather than hunter-gatherers, setting in motion a momentous chain of events that could not have been foreseen at the time. Although this decision to control our own food supply is what propelled us into the modern world, Wells demonstrates with the latest genetic and anthropological data that such a dramatic shift in lifestyle had a downside that we're only beginning to recognize. Growing grain crops ultimately made the planet more crowded, sedentary and unhealthy. The expanding population and the need to apportion limiting resources such as water created hierarchies and inequalities. The desire to control - and no longer cooperate with - nature altered the concept of religion, making deities fewer and more influential, foreshadowing today's fanaticisms. The proximity of humans and animals bred diseases that metastasized over time. Freedom of movement and choice were replaced by a pressure to work that is the forebear of anxiety and depression millions feel today. Wells then offers a hopeful prescription for altering a life to which we were always ill-suited, changing priorities and self-destructive appetites before it's too late. A riveting and accessible scientific detective story, Pandora's Seed is an eye-opening book for anyone fascinated by the past and concerned about the future.

Spencer Wells - explorer, geneticist, geographer, and author - takes us on an exciting tour of the last 10,000 years of our history in order to forewarn us of what we shall have to deal with in the next 50 years -- Jared Diamond, Pulitzer-Prize-winning author of Guns, Germs and Steel and Collapse
Spencer Wells's writing combines a deep knowledge of the history of human evolution with a most engaging and lively manner of making that story come alive. Pandora's Seed draws upon compelling anecdotes and moving personal narratives to crystallize a crucial turning point in the history of our species, the point at which modern human beings stop and look back at our long evolutionary trajectory, and confront squarely its dark side, its cost -- Henry Louis Gates, Jr., Alphonse Fletcher University Professor, Harvard University
Spencer Wells has a provocate and timely message. He argues that we are at a critical juncture where our culture could destroy the very essence of what it means to be human ... Everyone with a stake in humanity's future should read this book -- Brian Fagan, author of The Great Warming and Cro-Magnon

Spencer Wells is a leading population geneticist, documentary filmmaker and author of The Journey of Man and Deep Ancestry. He received his PhD from Harvard University in 1994 and conducted his post-doctoral training with Luca Cavalli-Sforza at Stanford University. His landmark research findings from a field study that encompassed 25,000 miles of Asia and the former Soviet republics led to advances in the understanding of the male Y chromosome and its ability to trace ancestral human migration. He was previously director of the Population Genetics Research Group at the Wellcome Trust Centre for Human Genetics at Oxford and was recently appointed Frank H.T. Rhodes Visiting Professor at Cornell University. Wells is currently National Geographic Explorer-in-Residence and spearheads the Genographic Project. He lives with his wife, a documentary filmmaker, in Washington, DC.

GOR003625879
Pandora's Seed: The Unforeseen Cost of Civilization by Spencer Wells
Spencer Wells
Used - Very Good
Hardback
Penguin Books Ltd
2010-06-03
256
0713997559
9780713997552
N/A
Book picture is for illustrative purposes only, actual binding, cover or edition may vary.
This is a used book - there is no escaping the fact it has been read by someone else and it will show signs of wear and previous use. Overall we expect it to be in very good condition, but if you are not entirely satisfied please get in touch with us.