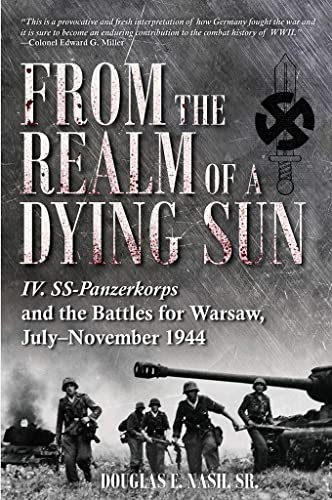 From the Realm of a Dying Sun by Sr. Nash

An account of the IV SS-Panzerkorps, an SS corps that participated in many of the key battles fought on the Eastern Front during the last year of the war.

From the Realm of a Dying Sun: Iv. Ss-Panzerkorps and the Battles for Warsaw, July-November 1944 (Volume I) by Sr. Nash

During World War Two, the armed or Waffen-SS branch of the Third Reich's dreaded security service expanded from two divisions in 1940 to 38 divisions by the end of the war, eventually growing to a force of over 900,000 men until Germany's defeat in May 1945. Not satisfied with allowing his nascent force to be commanded in combat by army headquarters of the Wehrmacht, Heinrich Himmler, chief of the SS, began to create his own SS corps and army headquarters beginning with the SS-Panzerkorps in July 1942. As the number of Waffen-SS divisions increased, so did the number of corps headquarters, with 18 corps and two armies being planned or activated by the war's end. While the histories of the first three SS corps are well known, the IV SS-Panzerkorps - which never fought in the west or in Berlin but participated in many of the key battles fought on the Eastern Front during the last year of the war - has been overlooked. Activated during the initial stages of the defence of Warsaw in late July 1944, the corps, consisting of both the 3. and 5. SS-Panzer Divisions (Totenkopf and Wiking, respectively) was born in battle and spent the last ten months of the war in combat, figuring prominently in the battles of Warsaw, the attempted Relief of Budapest, Operation Spring Awakening, the defence of Vienna, and the withdrawal into Austria where it finally surrendered to American forces in May 1945. Herbert Otto Gille's IV SS-Panzerkorps was renowned for its tenacity, high morale and, above all, its lethality, whether conducting a hard-hitting counterattack or a stubborn defense in situations where its divisions were hopelessly outnumbered. Often embroiled in heated disputes with its immediate Wehrmacht higher headquarters over his seemingly cavalier conduct of operations, Gille's corps remained to the bitter end one of the Third Reich's most reliable and formidable field formations.
This is in my honest opinion at the pinnacle of research and the author should be commended for his painstaking efforts and the easily readable format for such a challenging subject. I highly recommend this to anyone with an interest in World War Two Eastern Front battles, SS Panzer operations, and particularly anyone with an interest in Corps war-fighting theory and practice. * Military History Enthusiast Book Club *
It's produced to the usual high Casemate standard and it is deserving of the high praise it has already received. * Aviation Enthusiast Book Club *
Doug Nash is a West Point Class of 1980 graduate and a retired U.S. Army Colonel with 32 years of active duty service in places like Kosovo, Iraq, Afghanistan, Germany, Cuba, and Uzbekistan. His many works include Hell's Gate: The Battle of the Cherkassy Pocket January to February 1944 and Victory Was Beyond Their Grasp: with the 272nd Volks-Grenadier Division from the Huertgen Forest to the Heart of the Reich (which was nominated for the 2008 Pulitzer Prize for Non-Fiction).
1 Activation of IV. SS-Pz.Korps 2 Organization and Duties of the Panzer Corps Headquarters and Staff 3 Organization of Corps and Army Troops 4 The Leaders and Divisions 5 The Tank Battle of Praga, 28 July-6 August 1944 6 Operational Interlude: Unternehmen Bruckenschlag, 8-13 August 1944 7 The First Defensive Battle of Warsaw, 18-30 August 1944 8 The Second Defensive Battle of Warsaw, Part I: 31 August-9 September 1944 9 The Second Defensive Battle of Warsaw, Part II: 10-22 September 1944 10 An Unexpected Lull in the Action, 23 September-9 October 1944 11 The Third Defensive Battle of Warsaw, 10-28 October 1944 12 The Battle of Modlin, 29 October-25 November 1944 Appendix A: Command and Staff Appendix B: IV. SS-Pz.Korps Battle and Campaign Participation Credits Appendix C: Selected Orders of Battle Appendix D: German Army, Waffen-SS and U.S. Army Rank Equivalents Appendix E: German Corps Staff Positions and U.S. Army Equivalents Appendix F: Glossary Endnotes 499 Bibliography 527 Index
NGR9781612006352
9781612006352
1612006353
From the Realm of a Dying Sun: Iv. Ss-Panzerkorps and the Battles for Warsaw, July-November 1944 (Volume I) by Sr. Nash
Sr. Nash
New
Hardback
Casemate Publishers
2020-02-15
576
N/A
Book picture is for illustrative purposes only, actual binding, cover or edition may vary.
This is a new book - be the first to read this copy. With untouched pages and a perfect binding, your brand new copy is ready to be opened for the first time
Trustpilot