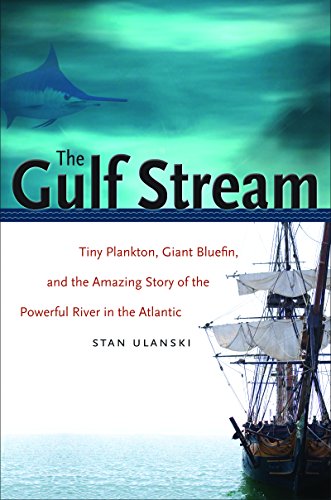 The Gulf Stream
by Stan Ulanski

Out of Stock
$66.99
inc. GST
Coursing through the Atlantic Ocean is a powerful current with a force 300 times that of the mighty Amazon. This title explores the science and history of this sea highway known as the Gulf Stream, one of the last vestiges of wilderness on Earth. It examines the scientific discovery of ocean circulation.
Very Good
Only 0 left

The Gulf Stream: Tiny Plankton, Giant Bluefin, and the Amazing Story of the Powerful River in the Atlantic by Stan Ulanski

This title shows an oceanic highway, teeming with life.Coursing through the Atlantic Ocean is a powerful current with a force 300 times that of the mighty Amazon. First discovered by Ponce de Leon in 1513, it sped ships laden with fortunes in spices, sugar, and rum from the New World back to Spain and also guided the ships of the buccaneers who preyed on them. Later, the current was essential to the development of the transatlantic slave trade. So important were the economic benefits of this oceanic conveyor belt to American traders that early maps of it - charted with the help of Benjamin Franklin - were kept as closely guarded secrets.Stan Ulanski explores the fascinating science and history of this sea highway known as the Gulf Stream, one of the last vestiges of wilderness on Earth. Spanning both distance and time, Ulanski's investigation reveals how the Gulf Stream affects and is affected by every living thing that encounters it - from tiny planktonic organisms to giant bluefin tuna, from ancient mariners to big game anglers. He examines the scientific discovery of ocean circulation, the biological life teeming in the stream, and the role of ocean currents in the settlement of the New World. ""The Gulf Stream"" continues to be crucial today for trade and sport, for the irreplaceable habitat it provides for plant and animal species, and for its key part in changing weather patterns and the climate of the North Atlantic region. ""The Gulf Stream"" is an essential introduction to this vital natural wonder.

Will fascinate a wide variety of readers. . . . Ulanski does an inspired job carrying centuries of information to the modern reader.--The Virginian Pilot
Valuable. . . . A multilayered and eminently insightful book about the way the natural world works.--The Texas Observer
Ulanski takes readers on a dizzying trip within, afloat and around the Gulf Stream. . . . This multifaceted treatment of 'the blue god' offers something for almost every kind of ocean lover.--Publishers Weekly
Ulanski is a scientist but doesn't write like one. His book is jam-packed with facts, but they are so gracefully integrated into the text that it's only when you come up for air that you realize you've been learning all along.--The Wall Street Journal
Historical examples add interest. . . . The sections on life and travel in the Gulf Stream are the most interesting and readable and will appeal to general readers.--Library Journal
Ulanski makes clear the connections between the physical world and human activity through history.--McCormick Messenger
Includes a fascinating account of the Gulf Stream's role in history.--Science News
Takes the reader on a pelagic voyage about the Atlantic Ocean and through time.--California Literary Review
Provides the layperson a synopsis of the physical origin, general biology, and rich exploration history of the Gulf Stream. . . . A concise, engaging blend of science and history.--Choice
The book's strength is its versatility. It can be used in an introductory oceanography or environmental science class, and is also geared to nature and outdoor enthusiasts with its section on marine life and fishing. History buffs will appreciate the power of the Gulf Stream in setting the stage for settlement in the Americas.--ForeWord Magazine

Stan Ulanski is professor of geology and environmental science at James Madison University and author of The Gulf Stream: Tiny Plankton, Giant Bluefin, and the Amazing Story of the Powerful River in the Atlantic. He is a passionate angler who has fished all along the Atlantic and Gulf coasts.

GOR010176648
The Gulf Stream: Tiny Plankton, Giant Bluefin, and the Amazing Story of the Powerful River in the Atlantic by Stan Ulanski
Stan Ulanski
Used - Very Good
Hardback
The University of North Carolina Press
2008-09-15
232
0807832170
9780807832172
N/A
Book picture is for illustrative purposes only, actual binding, cover or edition may vary.
This is a used book - there is no escaping the fact it has been read by someone else and it will show signs of wear and previous use. Overall we expect it to be in very good condition, but if you are not entirely satisfied please get in touch with us.