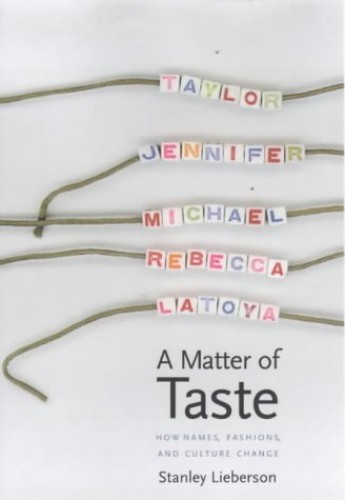 A Matter of Taste
by Stanley Lieberson

Out of Stock
$34.99
inc. GST
What accounts for our tastes? Why and how do they change over time? Stanley Lieberson analyzes children's first names to develop an original theory of fashion. He disputes the commonly-held notion that tastes in names (and other fashions) simply reflect societal shifts.
Very Good
Only 0 left

A Matter of Taste Summary

A Matter of Taste: How Names, Fashions and Culture Change by Stanley Lieberson

What accounts for our tastes? Why and how do they change over time? In this innovative book Stanley Lieberson analyzes children's first names to develop an original theory of fashion. Children's names provide an opportunity to view the pure mechanisms of fashion, unaffected by commercial interests that influence many fashions and tastes, says Lieberson. He disputes the commonly held notion that tastes in names (and other fashions) simply reflect societal shifts. There exist also "internal taste mechanisms" that drive changes in fashion even in the absence of social change, Lieberson contends. He explores the intricate and subtle ways in which internal mechanisms operate in concert with social forces to determine our choices of names. And he applies these conclusions to classical music, the decline of the fedora, women's garments, and other examples of change in fashion.

Examining extensive data on names over long periods of time, Lieberson discovers an orderly regularity to the process of change. He considers an array of naming practices -- how Rebecca became a popular name, why the names of certain important and attractive biblical characters are rarely chosen, and the influence of movie stars and characters in movies and novels. The book also inquires into name selection by specific ethnic and racial groups -- Mexicans' choices of names for their sons and daughters, African-American naming tastes from the time of slavery, changing names among American Jews throughout the twentieth century, and ethnic influences on naming in assimilated white groups. Lieberson concludes with a discussion of broader applications of internal mechanisms, suggesting that they operate widely in culture,across the entire "cultural surface".

GOR007217658
A Matter of Taste: How Names, Fashions and Culture Change by Stanley Lieberson
Stanley Lieberson
Used - Very Good
Hardback
Yale University Press
2000-11-01
350
0300083858
9780300083859
N/A
Book picture is for illustrative purposes only, actual binding, cover or edition may vary.
This is a used book - there is no escaping the fact it has been read by someone else and it will show signs of wear and previous use. Overall we expect it to be in very good condition, but if you are not entirely satisfied please get in touch with us.