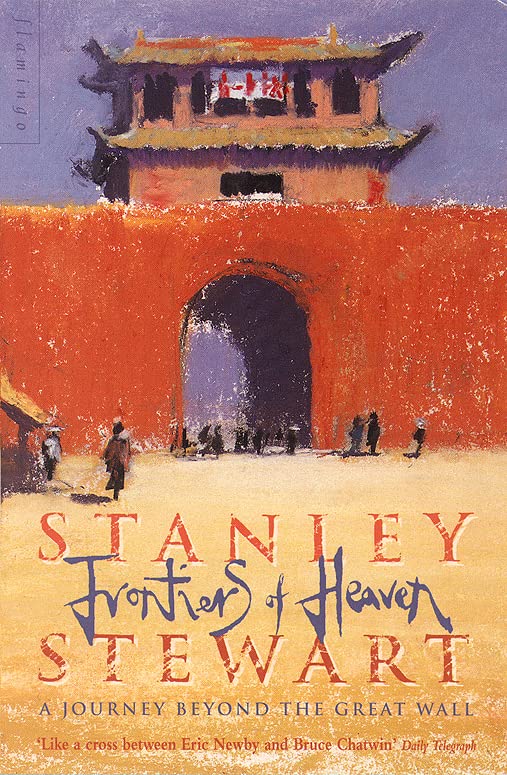 Frontiers of Heaven
by Stanley Stewart

In this captivating Journey halfway Asia - from Shanghai to the banks of the Indies - Stewart describe with great beauty and sensuality the landscape and history of China. He is an exact and subtle listen who portray the people he meets with it and unusual affliction.

Frontiers of Heaven by Stanley Stewart

For the Chinese, the Great Wall defined a psychological frontier. Within it lay the Celestial Kingdom, the compass of all civilization. Beyond lay a barbarian world of chaos and exile. Chinese journeys to the west, along the ancient Silk Road, were passages into the unknown, often into legend. Today the great western province of Xinjiang is still a land of exile, the destination of soldiers, reluctant settlers, political prisoners and disgraced officials. Following in their wake, Stanley Stewart's journey takes him halfway across Asia, from Shanghai to the banks of the Indus. He passes through the heartlands of China, beyond the Great Wall and into the wilds of Tartary. He crosses the Gobi and the Taklamakan deserts to the high passes of the Pamirs and the Karakorams. Along the way, he meets the modern Chinese for whom these regions beyond the Wall still hold the same morbid fascination. The author describes the lost cities of Central Asia, a Buddhist monastery in the shadow of Tibet, a Kirghiz wedding on the roof of the world, an encounter with nomads in the Mountains of Heaven, a tussle with the secret police in Kashgar, and a love affair in Xian. In a book packed with character and incident, he investigates the paradoxes of travel itself, the lure of far horizons and the isolation of exile.

GOR002754363
Frontiers of Heaven by Stanley Stewart
Stanley Stewart
Used - Very Good
Paperback
HarperCollins Publishers
1996-09-09
224
0006550290
9780006550297
Winner of Thomas Cook/Daily Telegraph Travel Book Award 1996 Winner of Thomas Cook Travel Book Award 1996
Book picture is for illustrative purposes only, actual binding, cover or edition may vary.
This is a used book - there is no escaping the fact it has been read by someone else and it will show signs of wear and previous use. Overall we expect it to be in very good condition, but if you are not entirely satisfied please get in touch with us.