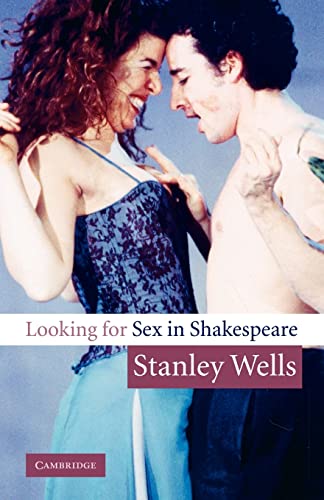 Looking for Sex in Shakespeare
by Stanley Wells (The Shakespeare Birthplace Trust, Stratford-upon-Avon)

In Stock
$16.49
inc. GST
Stanley Wells is one of the best-known and most versatile of Shakespeare scholars. This book considers how far sexual meaning in Shakespeare's writing is a matter of interpretation by actors, directors and critics. It will appeal to a broad readership of students, theatregoers and Shakespeare lovers.
Very Good Good
Only 1 left

Looking for Sex in Shakespeare Summary

Looking for Sex in Shakespeare by Stanley Wells (The Shakespeare Birthplace Trust, Stratford-upon-Avon)

Stanley Wells is one of the best-known and most versatile of Shakespeare scholars. This book, written with characteristic verve and accessibility, considers how far sexual meaning in Shakespeare's writing is a matter of interpretation by actors, directors and critics. Tracing interpretations of Shakespearean bawdy and innuendo from eighteenth-century editors to recent scholars and critics, Wells pays special attention to recent sexually orientated studies of A Midsummer Night's Dream, once regarded as the most innocent of its author's plays. He considers the Sonnets, some of which are addressed to a man, and asks whether they imply same-sex desire in the author, or are quasi-dramatic projections of the writer's imagination. Finally, he looks at how male-to-male relationships in the plays have been interpreted as sexual in both criticism and performance. Stanley Wells's lively, provocative, and open-minded book will appeal to a broad readership of students, theatregoers and Shakespeare lovers.

Looking for Sex in Shakespeare Reviews

'Looking for Sex in Shakespeare finds one of the most distinguished Shakespearean scholars in top form, witty, erudite and wonderfully sane. Illuminating the deep erotic riddles of the Sonnets, the rich performed life of the plays and the lascivious byways of post-modern criticism with equal insight, this collection is at once sufficiently amusing, serious and sexy to stand alongside the Shakespearean poetry that is its subject.' Michael Dobson
'... this book offers clear, good-humoured answers ...' Sunday Times
'The leading scholar Stanley Wells has collected recent lectures on Bardic bawdy at the Globe into this handy packet of three essays.' The Independent
'... stimulating and full of good sense; it contrives to be both fair-minded, and a bracing corrective to some current follies.' Sunday Telegraph
'Mr Wells has fun with certain 'lewd interpreters', and everywhere shows a sanity and openness of judgment that critics and actors should note.' The Economist
'... thoughtful and amusing ... This is only a little book but it touches on some big theses: the relations between text and script and the different focuses of reader and performer (not always the same thing), as well as the frequent silliness of scholars and actors who are as fallible as the rest of us.' Around the Globe
'Wells really has no equal writing today in terms of Shakespearean criticism and this superb book blows fresh air up the skirts of many a donnish fancy proving finally to be a corrective to many silliness which occlude the meaning of the plays rather than enhancing them.' Birmingham Post
'It is a short, readable volume, which explores its subject with clarity and whose leisurely style reflects its origins in a series of public lectures.' Modern Literary Review
"Looking for Sex in Shakespeare is a richly informative and learned book that endeavors to take a fresh look at a topic that's been on everyone's mind for at least the last century: the role and importance of sex in Shakespeare's plays and poems." Gay and Lesbian Review
"...a vital resource..." Theatre Journal

Foreword Patrick Spottiswoode; Preface; Introduction; 1. Lewd Interpreters; 2. The originality of Shakespeare's Sonnets; 3. 'I Think he Loves the World only for him': Men loving Men in Shakespeare's plays.

GOR003354893
Looking for Sex in Shakespeare by Stanley Wells (The Shakespeare Birthplace Trust, Stratford-upon-Avon)
Stanley Wells (The Shakespeare Birthplace Trust, Stratford-upon-Avon)
Used - Very Good
Paperback
Cambridge University Press
2004-04-22
124
0521540399
9780521540391
N/A
Book picture is for illustrative purposes only, actual binding, cover or edition may vary.
This is a used book - there is no escaping the fact it has been read by someone else and it will show signs of wear and previous use. Overall we expect it to be in very good condition, but if you are not entirely satisfied please get in touch with us.