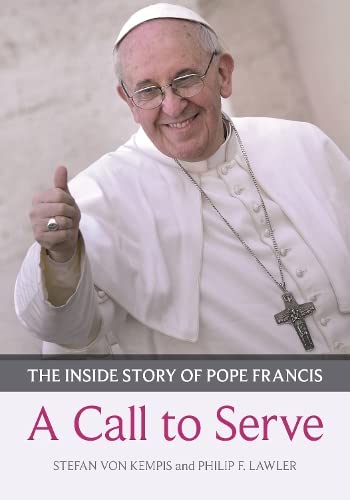 A Call to Serve
by Stefan Von Kempis

Out of Stock
$15.49
inc. GST
An authoritative and illuminating profile of the new pope by two seasoned Vatican reporters - his humble background, his rise to the papacy and his compelling spiritual vision, illustrated with over 150 colour photographs.
Very Good
Only 0 left

A Call to Serve Summary

A Call to Serve: The Inside Story of Pope Francis - Who He is, How He Lives, What He Asks by Stefan Von Kempis

He loves the tango, was trained as a Chemist, and in his youth he had a regular girlfriend whom he planned to marry. For a pope, Francis has an unusual life story. Drawing on conversations, interviews, inside information and the Pope's own writings and talks, A Call to Serve offers first-hand information, moving reflections, and profound insights into the life and character of Jorge Bergoglio, his ministry in Buenos Aires, the challenges he faces in Rome, and his vision for renewing the church and serving the world. Provides intriguing insights into the historic events surrounding Pope Benedict XVI's resignation, the conclave that elected Pope Francis, and the ups and downs of his time as a priest and cardinal in Argentina.

A Call to Serve Reviews

"Want to know the inside story of the recent abdication by one Pope and the election of a startling new one--complete with colorful photos and analysis by the noted journalist Philip Lawler? Well, here it is."--Fr. C. J. McCloskey, Church historian and Research Fellow at the Faith and Reason Institute in Washington DC.
Francis (born Jorge Mario Bergoglio, 17 December 1936) is the 266th and current Pope of the Catholic Church having been elected Bishop of Rome. He is thereby also the Sovereign of Vatican City. Born in Buenos Aires as the son of Italian parents, Bergoglio worked briefly as a chemical technician before entering seminary. He was ordained a priest in 1969. From 1973 to 1979 he was Argentina's Provincial superior of the Society of Jesus. He became Archbishop of Buenos Aires in 1998, and a cardinal in 2001. Following the resignation of Pope Benedict XVI in February 2013, on 13 March 2013 the papal conclave elected Bergoglio, who chose the papal name Francis in honor of Saint Francis of Assisi. Francis is the first Jesuit pope, the first pope from the Americas, and the first from the Southern Hemisphere. Throughout his life, both as an individual and a religious leader, Bergoglio has been noted for his humility, his concern for the poor, and his commitment to dialogue as a way to build bridges between people of all backgrounds, beliefs, and faiths. He is known for having a simpler and less formal approach to the papacy, most notably by choosing to reside in the Domus Sanctae Marthae guesthouse rather than the papal apartments of the Apostolic Palace formerly used by his predecessors. In addition, he is known for favoring simpler vestments void of ornamentation, by starting to refuse the traditional papal mozzetta cape upon his election. The collaborative work of Stefan von Kempis (Editor of Vatican Radio) and Philip F. Lawler (Editor of Catholic World News), ""A Call to Serve: Pope Francis and the Catholic Future"" is a 160 page compendium providing interested readers with a profusely illustrated and personal story of Pope Francis--and in that telling reveals background details of his unprecedented papal election. Drawn from conversations, interviews, insider information, and Pope Francis own writings, "A Call to Serve: Pope Francis and the Catholic Future"" is very highl

GOR005374978
A Call to Serve: The Inside Story of Pope Francis - Who He is, How He Lives, What He Asks by Stefan Von Kempis
Stefan Von Kempis
Used - Very Good
Paperback
SPCK Publishing
2013-05-16
160
0281071462
9780281071463
N/A
Book picture is for illustrative purposes only, actual binding, cover or edition may vary.
This is a used book - there is no escaping the fact it has been read by someone else and it will show signs of wear and previous use. Overall we expect it to be in very good condition, but if you are not entirely satisfied please get in touch with us.