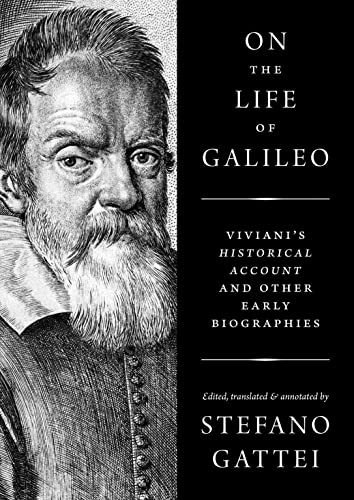 On the Life of Galileo by Stefano Gattei

On the Life of Galileo: Viviani's Historical Account and Other Early Biographies by Stefano Gattei

This unique critical edition presents key early biographical accounts of the life and work of Galileo Galilei (1564-1642), written by his close contemporaries. Collected and translated into English for the first time and supplemented by an introduction and incisive annotations by Stefano Gattei, these documents paint an incomparable firsthand picture of Galileo and offer rare insights into the construction of his public image and the complex intertwining of science, religion, and politics in seventeenth-century Italy.

Here in its entirety is Vincenzo Viviani's Historical Account, an extensive and influential biography of Galileo written in 1654 by his last and most devoted pupil. Viviani's text is accompanied by his "Letter to Prince Leopoldo de' Medici on the Application of Pendulum to Clocks" (1659), his 1674 description of Galileo's later works, and the long inscriptions on the facade of Viviani's Florentine palace (1702). The collection also includes the "Adulatio perniciosa," a Latin poem written in 1620 by Cardinal Maffeo Barberini-who, as Pope Urban VIII, would become Galileo's prosecutor-as well as descriptive accounts that emerged from the Roman court and contemporary European biographers.

Featuring the original texts in Italian, Latin, and French with their English translations on facing pages, this invaluable book shows how Galileo's pupils, friends, and critics shaped the Galileo myth for centuries to come, and brings together in one volume the primary sources needed to understand the legendary scientist in his time.

"Works by Galileo's seventeenth-century contemporaries, translated by Stefano Gattei, reveal at first hand the making of his myth in a tumultuous era."---Barbara Kiser, Nature
"This volume is a splendid contribution to Galileo's afterlife."---Eileen Reeves, Journal for the History of Astronomy
"This book is a major scholarly achievement and represents the first collection and translation into English of the earliest biographical accounts of Galileo's life . . . The book gives readers many fascinating key insights into Galileo's life, work and character." * Paradigm Explorer *
Stefano Gattei is visiting associate in history at the California Institute of Technology and Dibner Fellow at the Huntington Library. He is the author of Thomas Kuhn's "Linguistic Turn" and the Legacy of Logical Empiricism and Karl Popper's Philosophy of Science. He is the coeditor of Physics and Philosophy, the fourth volume of Paul Feyerabend's collected philosophical papers.
GOR010653794
9780691174891
069117489X
On the Life of Galileo: Viviani's Historical Account and Other Early Biographies by Stefano Gattei
Stefano Gattei
Used - Very Good
Hardback
Princeton University Press
2019-07-23
440
N/A
Book picture is for illustrative purposes only, actual binding, cover or edition may vary.
This is a used book - there is no escaping the fact it has been read by someone else and it will show signs of wear and previous use. Overall we expect it to be in very good condition, but if you are not entirely satisfied please get in touch with us
Trustpilot