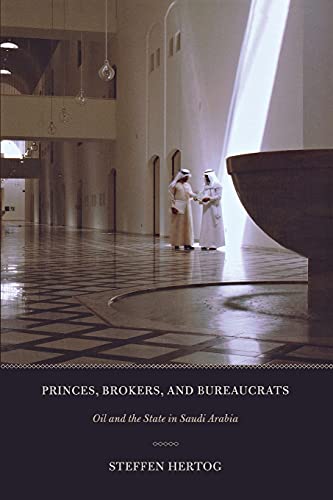 In Princes, Brokers, and Bureaucrats, the most thorough treatment of the political economy of Saudi Arabia to date, Steffen Hertog uncovers an untold history of how the elite rivalries and whims of half a century ago have shaped today's Saudi state.

Princes, Brokers, and Bureaucrats: Oil and the State in Saudi Arabia by Steffen Hertog

In Princes, Brokers, and Bureaucrats, the most thorough treatment of the political economy of Saudi Arabia to date, Steffen Hertog uncovers an untold history of how the elite rivalries and whims of half a century ago have shaped today's Saudi state and are reflected in its policies.

Starting in the late 1990s, Saudi Arabia embarked on an ambitious reform campaign to remedy its long-term economic stagnation. The results have been puzzling for both area specialists and political economists: Saudi institutions have not failed across the board, as theorists of the "rentier state" would predict, nor have they achieved the all-encompassing modernization the regime has touted. Instead, the kingdom has witnessed a bewildering melange of thorough failures and surprising successes.

Hertog argues that it is traits peculiar to the Saudi state that make sense of its uneven capacities. Oil rents since World War II have shaped Saudi state institutions in ways that are far from uniform. Oil money has given regime elites unusual leeway for various institutional experiments in different parts of the state: in some cases creating massive rent-seeking networks deeply interwoven with local society; in others large but passive bureaucracies; in yet others insulated islands of remarkable efficiency. This process has fragmented the Saudi state into an uncoordinated set of vertically divided fiefdoms. Case studies of foreign investment reform, labor market nationalization and WTO accession reveal how this oil-funded apparatus enables swift and successful policy-making in some policy areas, but produces coordination and regulation failures in others.

"It is an ability to see how politics shapes the structure and operations of the contemporary Saudi state that distinguishes Hertog's book. In a work characterized throughout by rigorous analysis, astute historical reflection and sharp observation, Hertog brilliantly illustrates the complexities and contradictions of an Arab rentier state."

"Princes, Brokers, and Bureaucrats is an extraordinary book. Impressively researched, insightful, and lucidly written, Steffen Hertog has laid bare the complexity of the Saudi state, including its history, the ways the state functions, the impact of oil wealth on its institutions, and the behavior of its bureaucrats.... It is no exaggeration to write that Hertog's book is the finest book ever written on politics and the state in Saudi Arabia, an unparalleled achievement.... Hertog's work reveals a number of wrinkles in the conventional wisdom on Saudi Arabia and the politics of oil states. Inefficiency and corruption exist in Saudi Arabia but so, too, do efficiency and professionalism. Where rentier theory predicts uniform patterns of government behavior, particularly in regard to corruption and paralyzing rent seeking, Hertog finds diverse patterns of behavior.... This book is the clearest and best documented work yet on the nuts and bolts of the Saudi government as well as its complicated bureaucracy and distribution of power."

Steffen Hertog is Kuwait Professor at Sciences Po Paris and Lecturer in the School of Government and International Affairs at the University of Durham.

GOR010096560
Princes, Brokers, and Bureaucrats: Oil and the State in Saudi Arabia by Steffen Hertog
Steffen Hertog
Used - Very Good
Paperback
Cornell University Press
2011-07-14
312
0801477514
9780801477515
N/A
Book picture is for illustrative purposes only, actual binding, cover or edition may vary.
This is a used book - there is no escaping the fact it has been read by someone else and it will show signs of wear and previous use. Overall we expect it to be in very good condition, but if you are not entirely satisfied please get in touch with us.