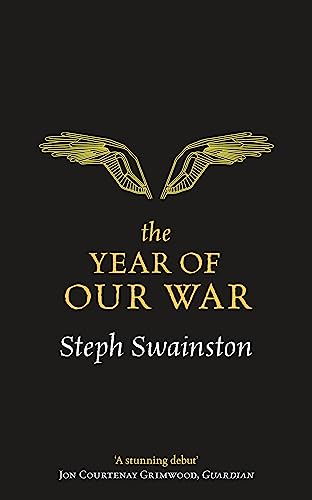 The Year of Our War
by Steph Swainston

The Year of Our War Summary

The Year of Our War by Steph Swainston

The most exciting, original and important new fantasy novel to be published since China Mieville's PERDIDO STREET STATION. A breathtakingly skilful debut.

Jant is the Messenger, one of the Circle, a cadre of fifty immortals who serve the Emperor. He is the only immortal - indeed the only man alive - who can fly.

The Emperor must protect mankind from the hordes of giant Insects who have plagued the land for centuries, eating everything and everyone in their path. But he must also contend with the rivalries and petty squabblings of his chosen immortals. These will will soon spill over into civil war.

Steph Swainston has written an astonishingly original literary fantasy. She writes beautifully. Her novel places her in a tradition of writing typified by Mervyn Peake, M. John Harrison and China Mieville. This is a breathtaking debut novel of the finest quality.

Customer Reviews - The Year of Our War

The Year of Our War Reviews

Honest-to-god unputdownable. A blistering debutSteph Swainston's writing is as elegantly superior to most other fantasy as a samurai sword is to a flint daggerA joy to read, it is bursting at the seams with ideas. The Year of Our War is the first book that makes you believe New Weird actually is a movement, rather than a bunch of books China Mieville likes. A Mieville quote appears prominently on the cover where he describes the book as "thoughtful, exuberant, incredibly inventive, funny but never whimsical or mannered." This is true and it doubles as a kind of manifesto pledge for New Weird - SF SITEA stunning fantasy, and the most incredible thing about it is that it is a first novel... The setting is impeccably realised, with a deftness of touch and a genius for description which would be impressive in an author of considerably greater experience - of the current crop of British fantasy writers, only China Mieville can touch this level of brilliance. In fifty years time, people are still going to be reading this book and talking about it the way we talk about Gormengast - INK MAGAZINENasty battles, giant Insects, blokes with wings. And a bloody good read... - SFX

Steph Swainston is a qualified archaeologist with a degree from Cambridge and a research degree. She worked as archaeologist for six years, working on the dig that researched the oldest recorded burial site in the UK, before working as an information scientist. Her Castle novels have been highly praised by authors and critics alike. She lives in Wokingham.

GOR009851479
The Year of Our War by Steph Swainston
Steph Swainston
Gollancz S.F.
Used - Very Good
Paperback
Orion Publishing Co
2017-04-13
384
1473221846
9781473221840
N/A
Book picture is for illustrative purposes only, actual binding, cover or edition may vary.
This is a used book - there is no escaping the fact it has been read by someone else and it will show signs of wear and previous use. Overall we expect it to be in very good condition, but if you are not entirely satisfied please get in touch with us.