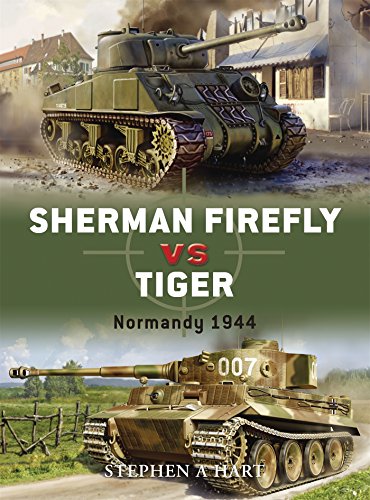 Sherman Firefly vs Tiger by Stephen A. Hart

One of the most feared weapons of WWII, the Tiger gained an aura of invincibility that was shattered by the introduction of the Sherman Firefly. This book describes the design and development of these two opponents, while also analyzing their strengths and weaknesses, assessing their tactics, weaponry and training.

Sherman Firefly vs Tiger: Normandy 1944 by Stephen A. Hart

The German Tiger heavy tank was a monster of a machine that dominated the battlefields of Europe. One of the most feared weapons of World War II, the Tiger gained an aura of invincibility that was only shattered by the introduction of the Sherman Firefly during the summer of 1944. Designed by the British to combat the Tiger, the Sherman Firefly was based on the American M4A4 Sherman, but was fitted with a powerful 17-pounder gun which made it a deadly opponent. This book describes the design and development of these two opponents, analyzing their strengths and weaknesses, assessing their tactics, weaponry and training. Gunsight artwork puts the reader 'inside' the tanks during famous battle scenarios, in a victory of superior Allied numbers, tactics and engineering.

"Written by Stephen A Hart, this 80-page paperback contains textual and visual details of the German Tiger and the British Sherman Firefly, thanks that battled it out in Normandy in 1944. the book compares each machine's strengths and weaknesses and evaluates the tactics, weaponry and training involved." --Sue Brettingen, Model Retailer (March 2008)

"This, in my opinion, is an excellent book for anyone who wants to go beyond the nuts and bolts of a vehicle and look at its actual use in combat. It deals with the (frequently ignored) human factor along with the 'grand scale' of strategic planning... Highly recommended." --Jim Rae, Aeroscale (August 2007)

"The German Tiger heavy tank dominated the battlefields of Europe and was one of the most feared weapons of World War II. Sherman Firefly vs. Tiger describes its design and deployment, with chapters offering plenty of technical construction information and analyzing strengths, weaknesses and the use of these tanks in war tactics. It's an excellent survey recommended for any library strong in the mechanics of World War II." --The Bookwatch (December 2007)

"Overall it is a fascinating and detailed look at these two combatants and a shift in the constantly changing 'one upmanship' of military hardware. It is a book that I thoroughly enjoyed reading and I can most highly recommend this one to you." --Scott Van Aken, modelingmadness (September 2007)

..".Stephen A Hart, senior lecturer at the Royal Military Academy Sandhurst, tells how the British sought to counter the already proven superior firepower and armor of the German Tiger I heavy tank by installing a high-velocity 17-pound cannon in the American-built M4 Sherman medium tank... After providing technical details, [the] book discusses crew training and tactics, profiles one or two outstanding operators of each tank and then shows how they performed against one another in combat. Enhanced by photos and artwork, including views of the interiors and through the gun sights, the Duel series is sure to spark debate among Buffs." --Jon Guttman, Military History Magazine (January/February 2008)

Dr Stephen A. Hart is senior lecturer in the War Studies department, the Royal Military Academy Sandhurst. Prior to this, he lectured in the International Studies Department at the University of Surrey, and in the War Studies Department, King's College London. He is the author of Montgomery and the 'Colossal Cracks': The 21st Army Group in Northwest Europe 1944-45 (Praeger, 2000), and has co-authored - with Russell Hart - several popular histories of the German Army in the Second World War. The author lives in Surrey, UK.
GOR003268453
9781846031502
1846031508
Sherman Firefly vs Tiger: Normandy 1944 by Stephen A. Hart
Stephen A. Hart
Duel
Used - Very Good
Paperback
Bloomsbury Publishing PLC
2007-09-05
80
N/A
Book picture is for illustrative purposes only, actual binding, cover or edition may vary.
This is a used book - there is no escaping the fact it has been read by someone else and it will show signs of wear and previous use. Overall we expect it to be in very good condition, but if you are not entirely satisfied please get in touch with us
Trustpilot