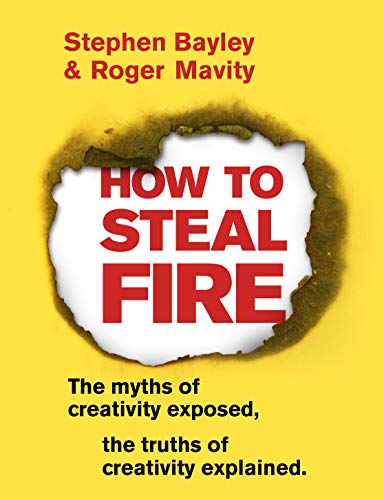 How to Steal Fire
by Stephen Bayley

How to Steal Fire Summary

________ `Promises to show readers how to think boldly and spark imaginative thought' (FT) ________ Creativity is a powerful force. It drives innovation, boosts our economy and enables us to fulfil our human potential. But what actually is creativity? Is it overrated? And where exactly do ideas come from in the first place? In this book, design gurus Stephen Bayley and Roger Mavity debunk the myths and common misconceptions that form our current thinking around this complex subject. In showing readers how to think boldly and remain undaunted by challenges, they examine the phenomenon from all sides: not only the creativity of invention and of imagination but also that of perception and of discovery, in order to reveal the truths we often overlook. Ultimately, How to Steal Fire will help you reclaim yourself from the anonymous dreariness of a data-driven culture and spark imaginative thought.

How to Steal Fire Reviews

"Very interesting... Talks a lot about the origins of creativity." -- Andrew Marr * Start the Week *
"Chief executives have talked for decades about the importance of innovation, which academics define as the implementation of new ideas. But far less attention has been devoted to figuring out how to foster creativity itself. [How to Steal Fire is] a book on one of the most eagerly sought qualities in the business world: creativity. It promises to show readers how to think boldly and spark imaginative thought." * FT *

Stephen Bayley (Author) In the 1970s, Terence Conran plucked Stephen from the obscurity of provincial academe to do his good works. One result was The Boilerhouse Project, promoting design in London's V&A, which became the most successful gallery of the eighties. Another result was the influential Design Museum. Stephen has since become one of the world's best-known commentators on design and popular culture. Roger Mavity (Author) Roger first learnt about creativity as a director of the admired French Gold Abbott advertising agency, before founding his own ad agency, Mavity Gilmore Jaume, whose clients included Honda cars, Trans World Airways and Burberry. He was then CEO of Sir Terence Conran's group of design-led businesses for several years, before starting a new career as a writer and photographer. His books include the global bestseller Life's a Pitch, also co-authored with Stephen Bayley, and his photography has been exhibited in London, Paris, Brussels and Amsterdam.

GOR009683674
How to Steal Fire: The Myths of Creativity Exposed, The Truths of Creativity Explained by Stephen Bayley
Stephen Bayley
Used - Very Good
Paperback
Transworld Publishers Ltd
2019-03-07
256
0593080084
9780593080085
N/A
Book picture is for illustrative purposes only, actual binding, cover or edition may vary.
This is a used book - there is no escaping the fact it has been read by someone else and it will show signs of wear and previous use. Overall we expect it to be in very good condition, but if you are not entirely satisfied please get in touch with us.