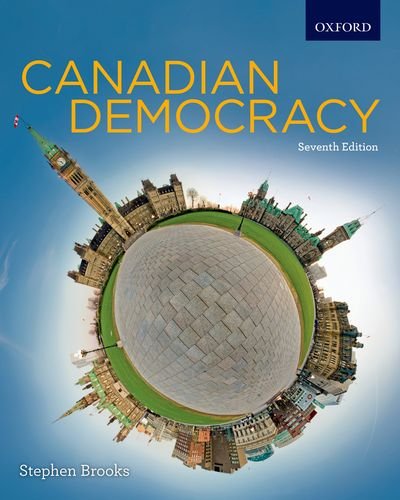 In Stock
$47.99
inc. GST
Canadian Democracy offers a comprehensive overview of Canadian politics and government, introducing readers to the elements and structures of government while also addressing the social and economic contexts of Canada's politics; institutions' and individuals' participation in the system; and current issues and controversies in the political arena.
Very Good
Only 1 left

Canadian Democracy remains the cornerstone of OUP's political science list with its approach focused around the central question, What is the state of democracy in Canada? In this fully revised seventh edition, Stephen Brooks continues to explore the characteristics and controversies associated with Canadian politics, covering the basic elements and structures of government (federalism, the machinery of government, the administrative state). He also addresses the social and economic contexts of the country's politics as well as individuals' and institutions' participation in the system and current issues and challenges in the political arena. Highlights of this revised edition include: a new chapter on the administrative state; a new chapter on women in politics; comprehensive updates throughout to bring readers the latest data, research, and analysis of current events; a newly designed interior and a significantly expanded art program; and more and better-integrated ancillaries to enhance both professors' instruction and students' learning.

"This is one of the most accessible, well-written texts on Canadian politics." --Holly Gibbs, University of Toronto Scarborough "This text is presented in easy-to-understand language that is appropriate to the topics presented and does well to introduce key terms that at first will be unfamiliar to students but does so in a way that avoids jargon or academic pretentiousness. This is a clear strength of the Brooks text." --Cheryl Collier, University of Windsor "Canadian Democracy very nicely connects an introduction to political science to the study of issues and institutions of Canadian politics. ... The writing is very lucid and successfully conveys complex ideas in comprehensible ways." --Neil Hibbert, University of Saskatchewan "I believe the text is very representative of the shift in Canadian political science over the last twenty years from a strict institutional interpretation to one that is more inclusive of societal/cultural and pluralist trends." --J.P. Lewis, University of Guelph "I much prefer this text to [competitors]. It is devoid of jargon and the content is presented in such a way that it should be readily understandable by students. The book is very well written." --Wolfgang Koerner, University of Ottawa

Stephen Brooks is a professor in the Department of Political Science at the University of Windsor, where he teaches in the areas of Canadian politics, public administration, and American politics. His research interests include the political influence of intellectuals, political thought in Canada and the United States, federalism, and public policy. He has been visiting professor at several institutions, including the University of Michigan and recently spent seven months teaching Canadian politics in Paris. He is currently writing a new text on Canada-US relations for OUP.

GOR010752634
Canadian Democracy by Stephen Brooks
Stephen Brooks
Used - Very Good
Paperback
Oxford University Press
2011-12-08
656
0195441559
9780195441550
N/A
Book picture is for illustrative purposes only, actual binding, cover or edition may vary.
This is a used book - there is no escaping the fact it has been read by someone else and it will show signs of wear and previous use. Overall we expect it to be in very good condition, but if you are not entirely satisfied please get in touch with us.