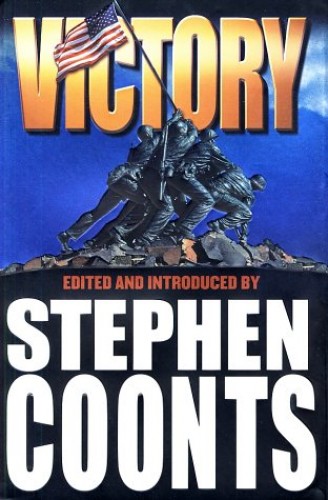 In Stock
$20.99
+10% GST
A stirring tribute to the Greatest Generation of Americans, "Victory" brings together the finest military fiction writers in the world with short novels of courage, skill, daring and sacrifice.
Very Good
Only 2 left

This exciting volume features "new "short novels by:
Stephen Coonts
Ralph Peters
Harold Coyle
Harold Robbins
R. J. Pineiro
David Hagberg
Jim DeDelice
James Cobb
Barrett Tillman
Dean Ing
A stirring tribute to the Greatest Generation of Americans, "Victory "brings together the finest military fiction writers in the world with short novels of courage, skill, daring, and sacrifice. Here you will meet the men and women who fought and won World War II and truly made the world safe for democracy, in thrilling stories of war as it was really fought.
An exciting sequel to Stephen Coonts's bestselling "Combat, Victory" brings together today's greatest military, espionage, and technothriller writers in all-original thrilling tales of World War II--great short novels that range from the home front to the battlefields of Europe to the depths of the Pacific Ocean. Join Stephen Coonts, Ralph Peters, Harold Coyle, Harold Robbins, R. J. Pineiro, David Hagberg, Jim DeFelice, James Cobb, Barrett Tillman, and Dean Ing in a book filled with nonstop action and adventure.
Stephen Coonts asks what happens when you load a Catalina flying boat with five tons of bombs, a half-dozen machine guns, and a crew that walks a fine line between valor and suicide. In the Pacific theater of war, the Japanese Navy is about to discover the answer to that question.
Ralph Peters follows a German officer in the starving days after World War II as he makes his way on foot back home, where a defeat more terrible than the Allied victory awaits him.
Harold Coyle takes us to the fierce fighting in the Pacific where the Japanese and the Americans clash over a strategic airfield on the island of Guadalcanal. Their battlefield will earn the nickname Bloody Ridge for both sides . . .
Harold Robbins goes back to a time before the war was fought--when a doctor is brought in to diagnose a very special patient, one whose survival could cost the lives of hundreds of thousands of others. Now caught between his ethics and his humanity, he must make a choice with the fate of the world at stake.
R. J. Pineiro brings the Eastern Front to light as a young American pilot is ordered to train Russian pilots in the new American made P-39D Aircobras during the final months of the brutal battle of in during the winter of 1942.
David Hagberg sends the OSS and MI6 behind enemy lines in Germany to stop the one weapon that can win the war for Hitler and Nazi Germany, an electromechanical guidance system that can launch missiles not only across countries, but across the ocean and hit the United States.
Jim DeFelice takes us to the height of the war when information was bought dearly on both sides. When an American pilot parachutes into Germany to gather information, he lands right in the middle of the viper's nest--a place more deadly than anything he could have found in the skies above.
James Cobb sends a special detail of PBY Catalina flying boats hunting for a hidden enemy radar station that provides the Japanese Navy with an edge in the war for the Pacific.
Barrett Tillman brings us into a gruesome fight as a Marine Corps flamethrower unit fights Japanese defenders on Tarawa Atoll in November 1943.
Dean Ing takes into the world of espionage as the Army Air Force becomes convinced that a Nazi superweapon can reach New York and Washington. As an interceptor is rush developed, a plane-crazy young Texan begins to suspect that someone on the team has an agenda all his own. . . .
Here they are: ten bestselling military, espionage, and technothriller authors paying tribute to the Greatest Generation of Americans.

"Editor Coonts has gathered an impressive group of technothriller authors for this testosterone laden anthology. These 'John and Jane Wayne meet Star Wars' tales offer a chilling glimpse into warfare in the 21st century. The most successful focus is not on weird military technology, but on the men and women who must actually fight."
"War is as inevitable in this new century as it was in the past. A thought-provoking, plausible, and exciting look at the 'interesting times' the proverbial ancient Chinese curse says that we are condemned to live through."

Stephen Coonts is the author of seven "New York Times" bestselling novels, the first of which was the classic flying tale, " Flight of the Intruder," which spent more than six months at the top of "The New York Times" bestseller list. His novels have been published around the world and translated into more than a dozen languages. He was honored by the U.S. Naval Institute with its Author of the Year Award in 1986. His latest novel is America. He is also the editor of two anthologies, "War in the Air" and "The New York Times "bestselling "Combat." He resides with his wife, Deborah, in Nevada.

GOR003610161
Victory by
Used - Very Good
Paperback
Unknown
0
0312874626
9780312874629
N/A
Book picture is for illustrative purposes only, actual binding, cover or edition may vary.
This is a used book - there is no escaping the fact it has been read by someone else and it will show signs of wear and previous use. Overall we expect it to be in very good condition, but if you are not entirely satisfied please get in touch with us.